The question of making the market of fire arms accessible for Russian citizens has been a topic of numerous discussions in the government and media outlets of the country for years already. The State Duma, the Russian parliament, has returned to amendments to the federal law about weapons, which stipulate a certain extension of the list of civil defense weapons. 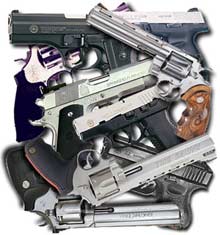 According to the current version of the Russian law on weapons, citizens have a right to purchase either smooth-bore guns or self-defense weapons, which include gas pistols and revolvers. If a person buys and uses a smooth-bore gun for five years, he or she will have a right to acquire semi-automatic arms. Rifled-bore pistols and revolvers, as well as shortened rifles and carbines are not permitted for open sales.

In Russia, one should have a special license to be able to purchase the officially permitted kinds of weapons. A person is supposed to collect a number of documents, submit them to the adequate licensing department and install a safe to store the weapons in. In the event the department makes a positive decision to issue the license, the future owner of a gun will have to take an exam in weapon handling. The weapons license is issued for the period of five years; it should be prolonged not less than three months before the expiry date. If someone does not want to run from one office to another to collect another package of documents, they can pay from $50 to $500 to a special firm to do all the paperwork.

Click here to see the photo gallery of fire arms

Moreover, when a person obtains all necessary permissions, he or she will not be allowed to use guns at discretion: every single shot will have to be reported to the nearest police department.

It is worthy of note that the price of a TT, Makarov and Kalashnikov guns varies from $500 to $3,000 on the black market of weapons in Russia. Those who support the need to legalize short-barreled fire arms, say that criminals and wealthy people can buy any kind of weapons they wish. Russian experts say that criminals do not need any laws to purchase weapons: there are millions of guns in the illegal turnover of arms in Russia. Since common people are unable to own weapons, it makes them absolutely defenseless under the conditions of a state of emergency. It just so happens that the law works for law-abiding citizens only.

The legalization of weapons in Russia would be able to strike a powerful blow on the criminal world. A criminal will probably think twice before he decides to attack this or that person because the would-be victim of the attack may have a gun too.

Rafail Sholomovich, a spokesman for the Civil Arms association, says that people do not usually harm each other in the majority of self-defense incidents, if a victim wields a gun: it usually endswithsimple demonstration of weapons. The specialist said that there are about five million guns registered in Russia.

In addition, the legalization of weapons will bring profit to the state too: weapon owners will have to pay taxes for their guns. The proponents of legalized short-barreled weapons in Russia say that the government is unfortunately  not willing to work on the question. To crown it all, a lot of Russian citizens are not ready for such progress: “Many possess the psychology of a victim. As a rule, Russians always hope for someone else, rather than themselves,” the chairman of the Moscow department of Civil Arms association, Rafail Ruditsky told Pravda.Ru.

Other specialists, however, believe that the legalization of short-barreled weapons in Russia will result in a massive growth of domestic crimes, especially when they are committed under the influence of alcohol, when people may use guns in fights. Petty crimes may become much more serious as well. Furthermore, if victims can fight back, criminals will try to intensify their attacks to exclude such a possibility.

A lot of Russian people cannot handle weapons. They think that it will be extremely dangerous to go out at night in the event the legalization of weapons is allowed.

There is no universal approach to the question of public weapons in Western states either. There are no restrictions to hold any types of civil weapons in Denmark, Germany, Switzerland, Romania and Finland. However, there are strict rules for it in Great Britain, Poland and the Netherlands. Specialists noticed that the legalization of weapons in Western states allowed to achieve considerable progress in terms of the deceasing level of criminality. On the other hand, the number of crimes was growing in the countries, the authorities of which decided to toughen official regulations for selling weapons to population.

However, one can find different statistics on the matter as well. According to US researcher Dr. Arthur Kellerman, keeping a gun in the home carries a murder risk 2.7 times greater than not keeping one. That is, excluding many other factors such as previous history of violence, class, race, etc., a household with a gun is 2.7 times more likely to experience a murder than a household without one, even while there was no significant increase in the risk of non-gun homicides. Up to 1,600 American children and teenagers die of gunshot wounds every year. According to National Vital Statistic Report, 58 percent of suicides are committed with the use of fire arms.

Opinion polls conducted in Russia have shown that the Russian society is not ready for free sales of weapons. One should first create the necessary culture to handle weapons, which would develop the specific public opinion on the matter.