When Putin leaves, his course will be continued

Russian President Putin delivered his annual speech to the Federal Assembly yesterday. It was Putin’s eighth state-of-the-nation address, which also became his final one. Putin made it clear during the speech that he was going to leave the presidential office in the near future. The next state-of-the-nation address will be delivered by the new head of state. Nevertheless, Putin’s speech did not contain a farewell message in it: the president presented the pre-election program of his successor, which was based on all the previous eight addresses of the incumbent president. 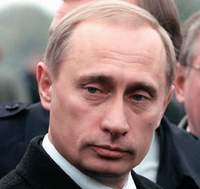 When Putin leaves, his course will be continued

Putin started his speech with a moment of silence to honour the deceased President of Russia Boris Yeltsin. Afterwards, Putin summarized the results of his presidency. As he said, Russia became one of ten countries with largest economies in the world. Putin pointed out that Russia still has its adversaries – oligarchs and the West – who try to do their best to put obstacles on the way of Russia's development and revival. “There are some who wish to retrieve the recent past. They want to plunder the nation; others intend to deprive our country of its political and economic independence. Foreign countries continue to increase the funding of activities to interfere into our internal affairs,” Putin said.

Vladimir Putin’s prime goal is to keep the power and the society consolidated and to exclude the political fight around the state priorities. That is why Putin outlined several of the priorities, which should lay the foundation for the activity of the future president after the election in March of 2008.

The central themes of Putin’s address were: the social field, state investments into national economy and foreign policies against the background of worsening relations with the West.

Putin praised the implementation of national projects in Russia. He positively estimated the projects conducted in the field of healthcare, education and the agricultural complex. The president paid special attention to the housing project, which many experts describe as a complete failure.

As for the economic part of the address, Putin offered to use oil and gas revenues to support the national pension system. Putin also said that the state and private companies were going to invest up to 12 trillion rubles in the development of the electric power industry before 2020. Russia uses its natural resources potential on the level of 20 percent only as opposed to 70-80 percent in other developed countries of the world. An atomic corporation will be created in Russia to build 26 nuclear power plants during the forthcoming 12 years, Putin said.

A huge investment is to be made in Putin’s favorite field of science – nanotechnologies. Putin announced the establishment of the national corporation of nanotechnologies. About 130 billion rubles are to be invested in the sphere.

The third and the conclusive part of the address was devoted to foreign policies. The president stated that Russia was restricted in the disposition of armed forces on its territories because of the Conventional Forces in Europe Treaty signed in 1991. “As a matter of fact, we are the only country that has flank restrictions in the south and in the north. Our partners have not even ratified the pact. The partners are being tactless at this point, planning to deploy elements of their air defense system in the Czech Republic and in Poland,” the president said. Putin declared moratorium on the pact and said that Russia could fully decline its obligation on the document. "In this connection, I consider it expedient to declare a moratorium on Russia's implementation of this treaty - in any case, until all countries of the world have ratified and started to strictly implement it. I propose discussing this problem in the NATO-Russia Council, and, should there be no progress in the negotiations, to look at the possibility of ceasing our commitments under the CFE treaty," Putin said.