The regular meeting of the military-industrial commission of the Russian government (MICom) presided by the First Vice-Premier Sergey Ivanov took place on March, 20 at JSC Svetlana in St. Petersburg. The key point in the agenda was nanotechnologies, micro-electronics and elementary base. According to the Vice-Premier the state intends to support national electronics within the frameworks of the federal target program and state defense order. Existing dependence of the domestic electronic industry on import was called by Sergey Ivanov "inexpedient". “I Think, all present here understand that buying such components abroad in the volumes necessary for us is inexpedient both from the economic point of view, and from the point of view of the national security”, he said. 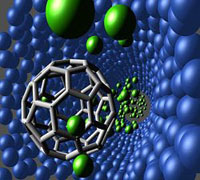 The situation in the Russian micro-electronic industry requires immediate interference of the state. According to the Federal Agency on Industry in 1990 domestic sector met 100 percent requirements of both civil and military industries. In 2005 the specific volume of import grew up to 93,7 percent ($590 million) against 6,3 percent ($40 million) of Russian components. The main reason, as in all other sectors, is the continuous lack of the state orders, first of all from the MoD. In 1990 the sector’s production volumes were assessed at $3,463 billion, in 2005 – just $439,7 million. Another equally important reason for the situation is the total absence of the state investments into the modernization and construction of new technologies from the state. While Russia is still reaching the level of 0,5-0,35-0,25-0,18 micro microns, foreign competitors are moving from 0,18-0,13 level to nano ranges.

St. Petersburg based Svetlana hosted the meeting of the MICom dedicated to the above matter because it is one of the few Russian manufacturers capable of producing adequate goods for the military sphere. It makes electronic components for the air defense systems S-300, Buk, Tor, Tunguska, fighters Mig-29, Mig-31, Su-27, the systems of satellite communication and investigation, new generation intercontinental missiles Topol-M. According to the general director of the company Vladimir Popov Svetlana is ready to ensure up to 70% of the Russian market of semiconductors. By 2011 the enterprise plans to produce up to 5-6 000 semi-conductor plates. The nitride-gallium semiconductors made by Svetlana are on the level of the French and Japanese competitors, slightly lagging behind the US made matches. Among foreign clients of Svetlana are world known brands Hitachi, Heimann Rheinmetall Elektronic, Bertelsmann, ABB and other.

However, a single enterprise cannot restore the order in the whole industry. This is a task of the federal target program “National Technological Base for 2007-2011” approved by the government on January, 29. The total budget of the program is RUB 99,458 billion, of which RUB 49,549 billion is to come from the state budget. Non-budget financing assumes “not only defense order, but also civil contracts”, as Sergey Ivanov stressed.

The discussion of the problems of electronic industry coincided with the centennial anniversary of the world’s first precedent of radio-electronic warfare. For the first time radio jamming was reported during the Russian-Japanese ware of 1904-1905, when the captains of the Russian combat ships Izumrud and Dmitry Donskoi jammed Japanese communications. This is why today April, 15 in Russia is the official “Day of the Radio-Electronic Warfare Specialists”.