Russian nuclear energy officials hosted an Iranian delegation Wednesday for talks on the construction of a Russian-built nuclear plant that has fallen behind schedule because of what Moscow said were delays in Iranian payments. 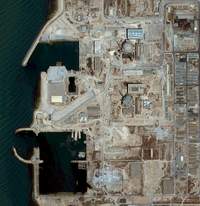 Vladimir Pavlov, a top official at the state-run company that is building the Bushehr nuclear plant in southern Iran, said the talks with the Iranians would focus on the funding shortage. The Iranian delegation was led by Mohammed Saeedi, vice president for planning and international affairs at the Atomic Energy Organization of Iran.

"The main issue on the agenda of today's meeting is to discuss the crisis situation connected to the lack of funding of the project by the Iranian side," Pavlov, who heads the department in charge of the plant's construction at Atomstroiexport, said in a statement.

The Iranian delegation's visit follows Moscow's warning last month that Iranian payment delays would push back both Bushehr's planned September launch and the uranium fuel deliveries that had earlier been scheduled to begin this month. Iran has been eager to get the uranium fuel, but Russian officials said it would only be delivered six months before the plant's launch.

Pavlov said that Russia was continuing construction work under the US$1 billion (EUR 760 million) Bushehr contract, but added that the talks would focus on "the impact of insufficient funding on the schedule of putting the reactor in operation."

Russian officials said last month that Iran was to pay Russia US$25 million (EUR 19 million) a month for construction work at the Bushehr plant but had paid only a fraction of the amount in recent months.

Atomstroiexport vice president Yevgeniya Neimerovets said Wednesday that Iran has not made any payments since Jan. 17. "The lack of payments has put our partners and subcontractors in a very difficult position," she said in a statement.

Iranian officials have rejected the Russian claims that Tehran has failed to meet the payment schedule and suggested Moscow was caving in to international pressure to take a tougher line on Iran.

The funding dispute comes amid persistent diplomatic efforts to persuade Iran to halt uranium enrichment in order to allay international fears that it could be seeking to build nuclear weapons.

In December, Russia supported a U.N. Security Council resolution imposing limited sanctions against Iran over its refusal to stop uranium enrichment, but the support came only after an initial proposal that would have imposed curbs on the Bushehr plant was dropped.

Russia emphasizes that Iran has the right to a peaceful nuclear energy program, and President Vladimir Putin and other officials repeatedly have said Moscow would honor the Bushehr contract, the AP reports.

The United States and some allies claim Iran's nuclear program is aimed at developing nuclear weapons, while Tehran maintains it is only intended to generate electricity.

Senior representatives of the five permanent U.N. Security Council members - Russia, China, the United States, Britain and France - are discussing possible new sanctions against Iran to force it to suspend its enrichment effort.