Vladimir Putin's day yesterday was filled with adventures in the sky and on the ground. A helicopter took the Russian president to the town of Zhukovsky in the Moscow region in the morning for the participation in the International MAKS-2005 air show. Having delivered the speech at the opening ceremony of the show and having viewed several pavilions, Putin left show on board the helicopter as well. The head of state arrived at the Chkalovsky airbase, where Putin personally tested the Tu-160 strategic bomber plane. Vladimir Putin spent five hours on board the bomber and landed at an air base in the Murmansk region in Russia's north only at 9 p.m. 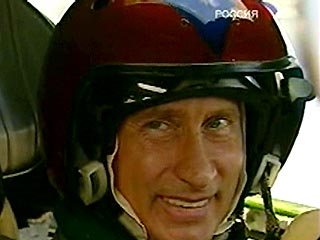 Putin welcomed the idea of establishing a free economic zone on the territory of the air base in Zhukovsky, where MAKS-2005 is being currently held. Sergei Chemezov, the director of the Russian defense enterprise Rosoboronexport, said that the free economic zone could be used for the creation of special infrastructure for air shows and other exhibitions of defense technologies, land troops weaponry in particular.

The first document, which was signed at MAKS-2005, was the trilateral agreement about the delivery and exploitation of An-140 airplanes of the Russian assembly. An-140 is a regional jetliner, which is capable of carrying passengers up to 2,000 kilometers and operating at temperature differences of 100 degrees. The plane can land on any runways, ground or pebble ones, covered with snow and ice. The noise level of the new plane meets European standards. An-140 was originally developed as a market aircraft: its price seems rather attractive - $8.5 million.

It is noteworthy that Rosoboronexport signed an agreement with HAL Corporation (India) to project the AL-55I aircraft engine and subsequently launch its serial production in India. The engine is supposed to be installed for India's HJT-36 training planes. The contract is evaluated at $300 million.

The European Aeronautic Defense and Space Company, EADS, signed an agreement to purchase ten percent of shares of the Russian aircraft-building corporation, Irkut. The signing of the contract finally completed two-year talks on the matter.

Another well-known Russian company, Sukhoi, signed a contract with the Federal Agency for Industry to project the regional RRJ aircraft. The state is to assign 7.9 billion rubles during 2005-2009 within the scope of the project.

Vladimir Putin currently participates in military exercises of Russia's Northern Navy, which started in the Barents Sea today. The head of state observes the maneuvers from Peter The Great nuclear cruiser, which he boarded yesterday. 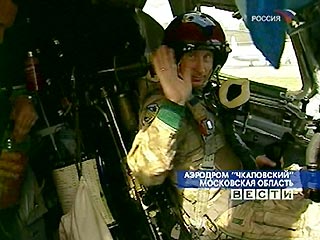 The maneuvers of the Northern Navy of Russia attracted attention of foreign states, like it happened before. The Norwegian and British aviation and navy observe the process carefully.

Putin watched the test launch of a new long-range cruise missile yesterday, as the president was flying on board the Tu-160 strategic bomber from the Moscow region. “It was not just a regular flight. We were testing a new missile,” Putin told reporters when the bomber plane landed. “The Defense Minister reported that the missile had hit the target successfully. It is a very good result,” Putin said.

A curious occurrence took place with Vladimir Putin yesterday as the president was leaving the international MAKS-2005 air show. Driving from one stand to another, the president stopped his vehicle near an ice cream stall. Putin bought strawberry and chocolate ice creams made by Nestle, Itar-Tass reports.

The president of Russia stepped out of the car, approached the salesgirl and asked for “just plain ice cream.” The salesgirl handed out two ice creams to the president. “I was so shocked, I could hardly feel my hands when I was taking the money from the president,” salesgirl named only as Nadezhda told reporters afterwards. 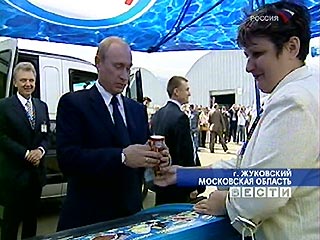 The president tried to pay for the ice cream with a thousand-ruble note (which is a note of the largest value in Russia, it equals about $40), but the salesgirl said that she did not have so much change. “Will this do?” – the president asked and reached out a 500-ruble note. Putin did not wait for the answer, took the ice cream and returned in the car. “He did not even take the change,” the salesgirl said.

It is worth mentioning that it was not the first time, when journalists eye-witnessed Putin's passion for ice cream. Reporters saw Vladimir Putin eating four chocolate-coated ice creams in 2000 during a defense show in Nizhny Tagil. When the president finished with his delicacy, he told reporters that he had eaten such delicious ice cream only in his childhood. The management of the ice-cream-making company decided toname their product in honor of the president afterwards and started producing the “President” ice cream. Local residents started joking that one could lick the “President” for only five rubles.

In the meantime, spokespeople for Nestle were happy to know about the choice of the Russian president to buy their product. Kremlin cooks confirmed Putin's ice cream passion: “Our president likes to eat ice cream. He is a sporty person, he likes eating healthy food,” one of the cooks said.