International Aviation and Space Salon MAKS-2005 is to begin on Tuesday in the Russian town of Zhukovsky, the Moscow region

MAKS is a Russian response to Le Bourget and Farnborough air shows. Organizers of the show say that there will be 40 participating countries in Zhukovsky this year. To compare with, companies from 34 countries took part in London Farnborough air show in 2004 and 46 countries participated in Paris Air Show 2005 at Le bourget. 170 different aircrafts will be displayed at MAKS air show. Nevertheless, it is not the quantity, but the quality, which is meant to impress the visitors of the exhibition. Unfortunately, the main novelty of the world aviation industry - 555-seater Airbus A380 - will not be exhibited at the show. Russian Air Force fighters and US Air Force warplanes will have to make up for it. 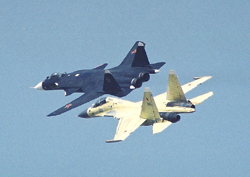 The newcomer, which is definitely worth seeing, is a unique super maneuverable lightweight fighter MiG-29 OVT with variable thrust vector. Its engine nozzles can change their position at 360 degrees. It would be similar to a car with moving front and rear wheels to be able to turn round at the bandbox. The aircraft had been exhibited at MAKS-2003, but this time it will also fly. US Air Force will exhibit its B-1B strategic bomber for the first time in Russia. It will be accompanied in its flight by multirole fighter F-16C and F-15E fighter; both had already been at MAKS before. Their pilots will probably pay special attention to the latest Russian S-400 Triumph air defense system, which will be exposed to public for the first time. The Russian Energia rocket-building corporation will take part in the show for the first time after a long break. It will show a full-scale model of Clipper spacecraft.

Those who are not keen on aircraft models will be welcome to look at the aerobatic performance, which is a must for any dignified air show. Aerobatic flights are the only entertaining program at the show. The performance will include such aerobatic teams as “The Russian Knights” on Su-27, “The Swifts” on MiG-29 (both teams are from the Russian Air Force 237th Aircraft Demonstration Centre named after Air Force Marshal Ivan Kozhedub), “Rus” on L-29, French “Patrouille de France” on Alphajet and Italian “Freccу Tricolori” on MB-339.

Russian pilots who will perform on combat other than aerobatic aircrafts will show joint aerobatics of nine Su-27 and MiG-29 aircrafts. “Russian Knights” and “The Swifts” will be based in Zhukovsky itself this year. According to the commander of Aircraft Demonstration Centre, Colonel Anatoly Omelchenko, this was decided 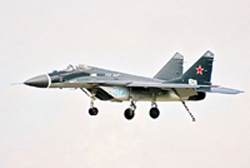 together with Russian Air Force Commander-in-Chief, Vladimir Mikhailov, so that the visitors could see not only the performance but the members of the team as well.

A common flyer will be probably interested in the An-148 jet plane that will be on display for the first time. There is a complex story behind this plane, which was developed by the Ukrainian Aeronautical Scientific Technical Complex (the aircraft is to be constructed in Russia and Ukraine). It is not about consequences of the “orange revolution” in Ukraine. An-148 is one of the projects that was started to replace outmoded Tu-154 and Tu-134. Constructors of Kiev decided not to take risks with first models of the plane at Le bourget. They could be arrested in connection with the suit of Cyprian company Energy Ltd. against the Ukrainian State Property Fund. That is why the exposition of the plane can be considered a true unveiling.

Besides, it will be interesting for any visitor to see so-called executive aircraft, or business-jets, those that are used by big shots mostly. Their saloons are trimmed with wood, soft seats are upholstered with leather and floors are covered with carpets. Brazilian Embraer Legacy or Falcon 2000 EX and Falcon 900 EX А from Dassault Aviation are among such aircraft.

The show is open to visitors from 19 to 21 August. The aerobatics flight will take place every day from noon till 5pm. The admission is 300 rubles (about US$10).