Davos Forum: Saying too much, doing too little, as usual

Russia is weakly represented at the 48th World Economic Forum that opened in Davos on 23 January. Why discuss the system, which Russia should abandon? Strange as it may seem, the motto  of the forum - "Creating a Shared Future in a Fractured World" - reflects the situation at its best. 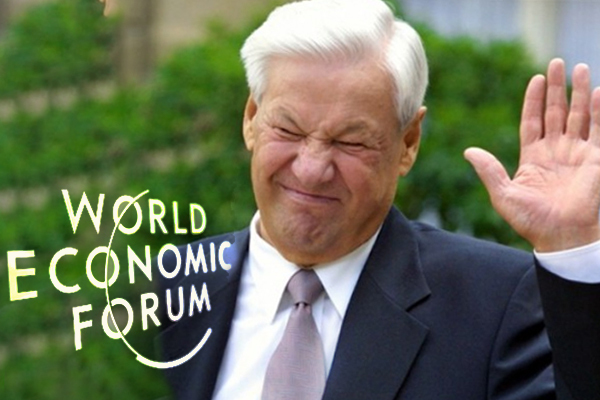 In Davos, Russia will be represented by Vice Prime Minister Vladislav Dvorkovich and "old wave" businessmen of the Yeltsin era. Chairwoman of the Central Bank of Russia Elvira Nabiullina wanted to attend the forum, but subsequently declined for a number of undeclared reasons. Judging by the slogan of the forum, globalists accused Russia of disunity in the world. So why go?

Yet, the Russians are no strangers there, because the world cannot live without Russia's oil and gas, Andrei Suzdaltsev, political scientist and deputy head of the Faculty of World Economy and Politics at the Higher School of Economics, told Pravda.Ru. "They will make us believe that Russia should return to the joint economic system, to the world without sanctions, but Russia would need to make concessions for this. They will try to put pressure on Russia in an effort to return the Crimea to Ukraine, etc, promising that everything will get better for Russia and investments will come," the expert said.

Davos will show interest in Russia's economic policy after the elections, because some things will change considerably, the expert believes.

During the 1990s, an agreement was concluded between Russia and the United States, according to which the West received all assets of the USSR outside the borders of the RSFSR at its disposal. In return, the West guaranteed investment and support of economy within the framework of the so-called "Yeltsin family" economist Mikhail Khazin said in an interview with "Echo of Moscow."

Since then, the "family" has been setting Russia's economic policy following instructions from Washington. "Nabiullina is bending over backwards to prevent an increase in the monetisation of the economy, not to let Russian enterprises get access to cheap loans," the economist said. However, the economist believes, the "family" has not been fulfilling its obligations properly for a while already and may therefore retire after the presidential election in Russia in March 2018.

Russia is not interested in the Davos forum from the point of view of strategic prospects, because the forum is devoted to outdated economic models, which Russia should leave behind.

Trump has "divided" the world too

The US also has big problems in Davos. US President Donald Trump has managed to quarrel with all his allies by the first anniversary of his stay in power. According to Andrei Suzdaltsev, Trump does not have a close dialogue either with Europe or with Asia.

Trump needs to support the global leadership of the United States, not only in the political, but also in an economic sense, the expert believes. Therefore, Trump will predictably speak about the "rise of the US economy, the minimal level of unemployment, available investments, the growth of the US stock market to let the whole world appreciate all those achievements."

According to Mikhail Khazin, Trump represents the real, rather than the financial sector" of the United States. In other words, Trump uses an administrative resource to support the real sector and exports, the expert concluded.

The new global leader is China

China intercepts the leadership of the United States in the globalisation of the world. Chinese leader Xi Jinping regularly uses phrases like "common future" in his speeches. For example, a year ago he spoke at the UN office in Geneva with a keynote address - "Working together to create common future for humanity."

Beijing is watching turbulence in Europe and the United States while implementing its grandiose global project known as One Belt, One Road Initiative. This is a win-win option, because it is based on the construction of infrastructure - the basis of economic growth in any system. The project will cost China about 900 billion dollars and embrace 65 countries throughout Eurasia. Chinese companies will build railways and roads, ports, warehouses. China will benefit greatly from exporting its products.

Russia does not have the strength for an independent project like that. At this stage, Beijing acts as an ally in switching the world to a new economic model. One should not forget that the economic union may quickly evolve into dictatorship, including in politics.