Russian politician Grigory Yavlinsky said that any escalation of the nuclear conflict near the borders of Russia is dangerous for the Russian Federation. 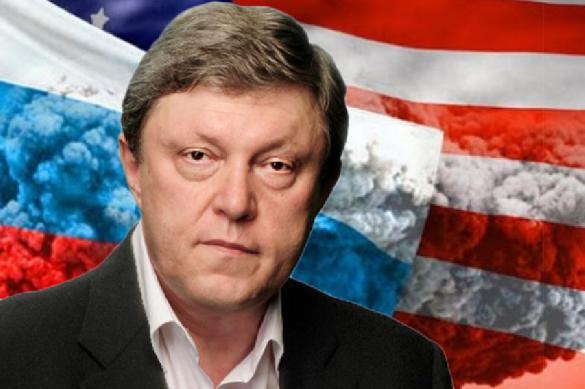 In an interview with Ekho Moskvy radio station, Yavlinsky said that if someone believes that North Korean ballistic missiles do not pose any threat to Russia, then those people are mistaken.

According to him, any escalation of conflicts with a possible use of nuclear weapons near Russia's borders poses a direct threat to Russia's security.

Yavlinsky reminded that Russia and the United States have been negotiating an agreement to limit strategic offensive weapons for decades, and a nuclear war did not happen. However, all negotiations on the subject have been stalled, he noted.

"In the late 1990s and in the early 2000s, I proposed creating a joint Russian-European missile defence system. In 2001, Putin even discussed this project with NATO Secretary General. If the West had taken up on the proposal, the world would not have come to the dangerous line we are all standing on today," Yavlinsky noted.

"As long as there are only two nuclear powers in today's world capable of destroying everything on the planet, and one can not rely on the United States and its sitting president in any way, it is Russia's responsibility. The control of all types of strategic offensive weapons is Russia's national interest," he added.

Grigory Yavlinsky, the founder of Yabloko party, believes that US President Donald Trump is "extremely unpleasant and even dangerous for us." "He does not care about Russia at all, and he is a deep American provincial man," Yavlinsky earlier said after the meeting of the Presidents of Russia and the United States in Hamburg. In his opinion, for Trump, Russia does not exist at all, when we do not create problems for him, or when the topic of Russia can not be used to "troll" his opponents."

"Therefore, Trump may make a decision with very negative consequences for us any time proceeding from considerations that do not have any relation to Russia. We have seen this already in the case of a missile attack on Syria, which was largely predetermined by the meeting of the US president with comrade Xi Jinping and Trump's desire to show that he is more resolute than Obama," Yavlinsky said.

Grigory Yavlinsky is best known as the author of the 500 Days Programme, a plan for the transition of the USSR to a free-market economy. He ran twice for Russia's presidency - in 1996, against Boris Yeltsin, finishing fourth with 7.3% of the vote; and in 2000, against Vladimir Putin, finishing third with 5.8%. He did not run in 2004 or 2008, after his party failed to cross the 5% threshold in the 2003 Duma elections. Yavlinsky is Yabloko party's nominee for President of Russia in the 2018 presidential election.