Yavlinsky will not have problems with obtaining the Ukrainian citizenship, if there is a need for it

The person, who will take the office of the prime minister is currently the key intrigue of the political life in Ukraine. When Yushchenko's rival, Viktor Yanukovich, stepped down in the beginning of January, the leader of the Ukrainian opposition promised to unveil the name of the new Ukrainian prime minister within two or three days. Two weeks have passed already, but it is still not known who is going to chair the new Ukrainian government. 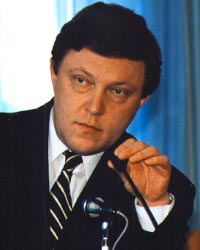 Analysts say that there are several candidates for the position. An outstanding figure of the Ukrainian opposition, Julia Timoshenko is the first on the list. Timoshenko has never concealed her desire to take the office of the prime minister. To crown it all, Julia Timoshenko is still sure that she will be appointed for the position. She states that it will be the result of certain agreements, which were concluded in the opposition camp prior to the revote of the second stage of the presidential election, which took place on December 26th.

Victor Yushchenko's another closest associate, the head of the budgetary committee of the Ukrainian parliament, Pyotr Poroshenko, has the same ambition too. Poroshenko also agrees to become the Ukrainian prime minister. He particularly stated that he would do his best to justify the president's confidence, if he ever offered the position of the prime minister. The position has not been offered to him yet, though.

Timoshenko and Poroshenko have another rival – Alexander Zinchenko, deputy chairman of the Ukrainian parliament. It is Zinchenko, who reportedly enjoys best chances for becoming the head of the Ukrainian government: his candidacy is more or less most suitable for all political forces that supported Yushchenko during the recent poll crisis across the nation.

The picture would be incomplete without the leader of the  Socialist Party, Alexander Moroz, and the chairman of the Party of Industrialists and Entrepreneurs, Anatoly Kinakh. Their chances are not that high in comparison with the above-mentioned politicians, but it would be too early to push Moroz and Kinakh into the political background.

It is not ruled out, though, that all these hopes are not meant to come true. The Russian Courier newspaper published an article on Tuesday, in which it was said that the leader of the Russian party Yabloko, Grigori Yavlinsky, might become the prime minister of Ukraine. It was added that Yavlinsky's candidacy is being currently discussed in Yushchenko's team. Yavlinsky, the newspaper wrote, has good chances to take the position because he is equally alienated from all political and economic clans of Ukraine. In addition, Yavlinsky might be offered to become Yushchenko's adviser.

Grigori Yavlinsky has a lot in common with Ukraine. He was born in Lvov – the Russian politician regularly visits his Ukrainian fatherland for winter holidays.  According to the Russian Courier, Yavlinsky's current stay in Lvov has been kept secret. Yavlinsky will not have problems with obtaining the Ukrainian citizenship, if there is a need for it. He was born in Ukraine, so it will be enough for the Russian politician to submit an adequate application and he will hold the Ukrainian passport very shortly.

Yabloko's press service, however, rejects the information about a possible appointment of their leader, Grigori Yavlinsky, for the position of the Ukrainian premier. Press secretary Yevgenia Dillendorf stated that the assumption was not true to fact at all. Some spokespeople for the party said that the rumor sprang from the Kremlin, who probably decided to take revenge on Yavlinksy for his anti-Putin statements and for his participation in actions of protest connected with welfare benefit cutoffs.

On the photo: Grigori Yavlinsky