Ten years ago, Moscow found itself unprotected from the new US anti-satellite and anti-missile system THAAD, which our bellicose "partners" were feverishly developing during those years.

During the recent tests of the American SAM, which successfully took place in Alaska in July of this year, the US intercepted a medium-range ballistic missile. The new NATO air defence complex successfully supplemented the NORAD shield that covers the North American continent from any external threat from space or the stratosphere.

In the opinion of Russian diplomats and the military, putting a new missile defence element into operation is an unfriendly act on the part of the United States, because the new weapon violates the status quo or the "parity of brute force" as professionals say.

Unfortunately, Russia's excellent interceptor fighter aircraft and world-famous Triumf air defence systems are not able to neutralise the missile threat. Detecting and destroying an aircraft is different. As for antimissile weapons, Russia lagged behind in this area during the 1990s and the early 2000s, while talking the talk about democracy and fraternisation with the Americans.

In 2002, Russia's main developer of missile weapons, Almaz-Antei Air Defence Concern, informed the scientific and military community of the launch of works on a fundamentally new product in the field of SAMs, the so-called S-500 Prometheus (Prometey) missile defence system.

In 2006, Almaz-Antey was officially named the lead developer of the fifth-generation air defence system. In 2009, scientists reported the completion of design documentation for Prometheus and the transition to practical tests. Finally, in 2010, the Russian government officially confirmed the technical possibility of creating a fifth-generation antiaircraft missile system.

This mobile air defence complex is a universal system capable of knocking down any targets, including low-flying satellites and hypersonic missiles of the future.

Analysing tactical and technical characteristics of the S-500, it catches attention that the new system does not come as an upgrade for the existing system, that is, the S-400. The previous generation is not designed to work on space objects and transcontinental ballistic missiles. In addition, it takes the S-400 nearly nine seconds to make a decision to destroy six targets. The Prometheus will need only two or three seconds for up to ten targets.

S-500 missiles have their own manoeuvring units and radar station. They are capable of intercepting an intercontinental ballistic missile in climb, that is, up to 185-200 kilometres, as well as during descent, attacking the head of the missile. The speed of 77N6-H and 77N6-H1 interceptors (from 5 to 7 kilometres per second) allows them not to have any warhead at all because their kinetic energy is enough. Nevertheless, to ensure guaranteed destruction of targets a decision was made to outfit the S-500 with a nuclear warhead.

No matter how perfect and modern the S-500 might be (the system is to enter the arsenal of the Russian army in 2018-2019), it pales in comparison with Almaz-Antei's latest development - A235 Nudol, which creates a three-echelon strategic defence system.

This system is said to replace the morally outdated A-135 Amur system around Moscow and other major cities and military bases. At the same time, Russia will take measures to replace long-range echelon launchers and conduct comprehensive upgrade of the Don 2N radar.

Nothing has been reported about the time when the Nudol system is ready and passed into service.  According to US sources, Russia has already conducted five tests of anti-satellite missiles. 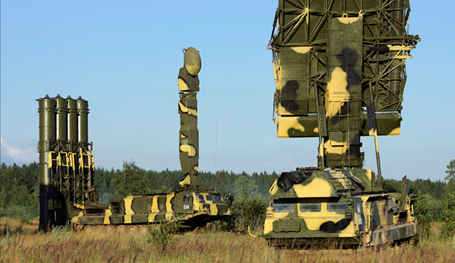 Russia strikes with its new hypersonic missile
18:21
Zelensky's adviser builds gigantic castles in the air of supreme justice about Russia's future
17:17
German colonel: Even US-made MLRS arms will not help Ukrainian army
16:41
Russia's S-70 Okhotnik combat drone to fly over Ukraine in 2023
16:22
NATO wages war against Russia through the hands of Ukrainian people
15:00
US dollar smile can only make other economies toothless
13:36
Russian porn actress stabbed to death in St. Petersburg
13:21
US diplomat says who Putin is friends with among NATO members
17:26
Russia confirms explosions near military airfield in Crimea
16:54
Russian Foreign Ministry lashes Estonia for its call to ban Russians from Europe
21:31
Ukrainian army about to break down completely
World
Instead of new arms, Washington presents Zelensky with 'black spot'