What weapons Russia is going to have in the 21st century

The issue of cyber security and cyber weapons has been talked about a lot recently. US and British media reported that Russia tested an unknown cyber weapon in the Black Sea in June. The weapon, as it was said, did not let the enemy track the course of warships, disrupted the work of navigators and provided incorrect data on vessels in the vicinity. 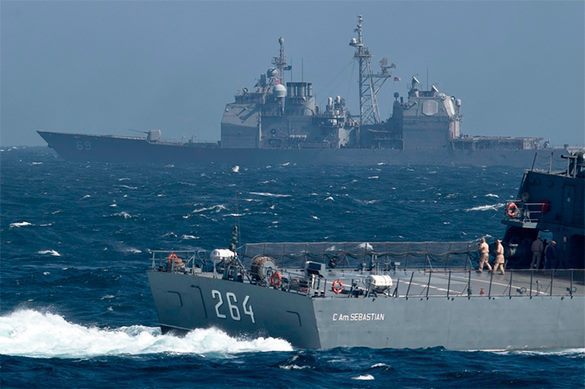 In order to find out what secret weapon Russia is developing with the use of new cyber-technologies, Pravda.Ru interviewed Alexei Leonkov, military expert, expert in the field of the use of Military Space Forces.

"Western publications are full of reports about Russia's new cyber weapon that allegedly made a US Navy ship run aground in the waters of the Black Sea after the ship had lost its course. Other sources say that it was not a cyber weapon, but an ordinary "jammer" that operates near secret objects."

"The vulnerability of the GPS system has been much talked about recently. Not only can one intercept navigation, but also give incorrect coordinates and confuse the enemy. For example, one can recall the story when Iran could confuse coordinates of a US drone aircraft to make the vehicle land on the territory of Iran, having intercepted the control over the UAV."

"Are there any means that can affect the work of onboard equipment?"

"Of course, there are ground station of coastal defence. There are long-range electronic warfare complexes that may cause problems for foreign vessels nearby."

"Military developments of the USSR have always enjoyed very good reputation, everyone knows renowned Soviet tanks and anti-aircraft systems. At the same time, little is known about the products of Russia's defence industry today. What weapons is Russia going to have in the 21st century? Are we entering the era of cyber warfare?"

"Well, we have combat robots, such as Nerekhta, as well as M and Uran platforms. Uran platform can work to clear areas of mines, but it also works as a robotic module equipped with arms. Some of those modules have been tested in Syria. The Syrian military used six Russian robots there, including M and Argo platforms. The Syrians also used "Carnation" artillery support systems. As a result, the Syrian army had four wounded men, while the militants lost more than 80 people.

"In Syria, Russia also used unmanned aircraft in urban combat conditions, during the siege of Aleppo, for instance. Aleppo was liberated with minimal losses, and everyone knows it. Russia has one of the world's finest radio electronic struggle systems. In addition, Russia also makes early detection radar complexes, both airborne and ground-based ones. Russia currently works to launch "Voronezh-SD" and "Voronezh-SM" radar stations. When those stations work at full strength, no enemy will be able to violate Russia's sovereignty unnoticed."

"How effective can unmanned weapons be?"

"Russia has both reconnaissance and combat drones. They all differ from the point of view of long-distance and short-range flights. Russia also sets up military units that will be specifically dedicated to working with unmanned aerial vehicles. Under the state arms program before 2020, complexes of unmanned aerial vehicles will be produced. Of course, we are not going to catch up with America - the Americans have more than 7,000 drones, but we will continue improving their quality."