Navalny, Khodorkovsky and Udaltsov about the future of Russia

Alexei Navalny has reacted to accusations of leadermania. One may say that Mr. Navalny was forced to react after he had faced criticism from blogger Sergei Udaltsov and former oil tycoon Mikhail Khodorkovsky. 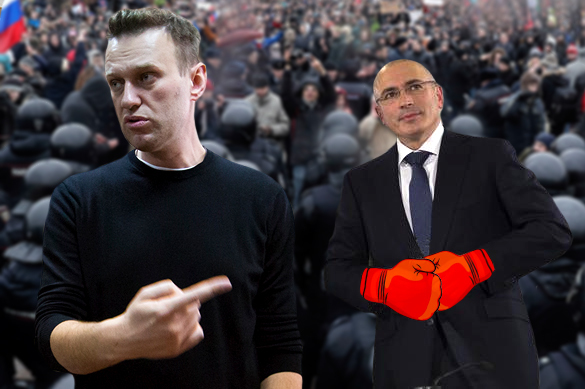 Last week, blogger Sergei Udaltsov accused Alexei Navalny of setting people up by calling for uncoordinated actions of protest. At the same time, Mikhail Khodorkovsky, the former head of Yukos oil company, stated that Mr. Navalny could evolve into "another Putin."

In response, Navalny advised Mr. Udaltsov should better watch the people in his team, particularly lawyer Violetta Volkova, who attended the press conference of the ex-coordinator of the Left Front organization. According to Navalny, Volkova appears to be "a lawyer of the opposition" even though her activities harm the opposition. "Udaltsov needs to be cautious about his choice of the curator," advised the blogger.

Alexei Navalny recommended Mikhail Khodorkovsky should read his election program, which says clearly everything about the reduction of the presidential term, the expansion of the powers of the parliament, and other things the are supposed to dispel fears about "Putin II."

"I have a very good attitude towards Mr. Khodorkovsky, he is an intelligent and good man, but he tends to take the side of the traditional opposition camp, which has led us all into a dead end," Navalny said. In his opinion, the subject of "leadermania" is of interest only to a very limited circle of individuals.

"First off, this topic is discussed in a narrow Facebook environment. Secondly, am I authoritarian? "I asked FBK employees, and they all say that I'm not authoritarian, that our style of work is democratic. Yet, one has to judge by what has been said and done. We have clearly stated that the super-presidential republic is not needed, I will become president and voluntarily reduce my powers. We will expand the powers of the parliament and free the media," Navalny said.

Obviously, Navalny's response to Khodorkovsky was a lot more extensive than the one to Udaltsov. Navalny did not cite any counterarguments to Udaltsov, because Alexei Navalny does not see Sergei Udaltsov, his former colleague from the Coordination Council of the opposition as a figure capable of showing influence on the people around him.

Navalny believes that the only thing that Udaltsov is capable of now is to say a few words that everyone will forget tomorrow. Navalny does not see Udaltsov as a rival, but he understands that he should not lose the sight of Sergei Udaltsov, whose first post-prison press conference attracted a lot of attention.

It is worth noting that Mr. Khodorkovsky has made several predictions about the advent of the new authoritarian leader with an unambiguous reference to Alexei Navalny. The former oil tycoon seems to support Navalny as an opposition activist, but says that if Navalny becomes president, Russia will have another Putin in the office.

Alexei Navalny's "election campaign" deserves special attention here as well. Navalny often says "when I am president" and the like. At the same time, everyone understands that there will be no presidential campaign for Mr. Navalny as such, because he has previous convictions. No one will change the Penal Code and the election law of the Russian Federation to let Navalny become a presidential candidate. By the way, Sergei Udaltsov was more honest at this point: "I'm not going to say that I'm going to become president in the presence of a criminal record." According to him, he does not want to engage in charlatanism.