So who is Mr. Navalny? 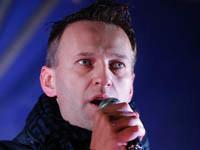 The supporters of Alexei Navalny have suddenly recognized that their candidate for mayor (Navalny runs for the position of the Moscow mayor) has of a lot of disadvantages. However, they acknowledge that they are ready to turn a blind eye on these disadvantages, because the leader of the Russian opposition movement will lead the country to democracy, restore order, to quietly leave afterwards.

Anything works when one needs to accomplish their goals: PR, anti-PR or self-flagellation ... Unexpected news came from the lips of those, who are considered loyal friends and supporters of mayoral candidate Alexei Navalny. The news, of course, relate to personality of the latter and aim to clarify the position of the mayoral candidate. Opposition activist Boris Nemtsov said that Alexei Navalny, like any of us, has a lot of disadvantages. One of them, for example, is nationalism. Indeed, there were times when Mr. Navalny was marching in the streets of Moscow under the flags symbolizing "primordial national statism." What is more, Navalny was against the presence of a number of citizens in the territory of the Russian Federation. So what?

According to Boris Nemtsov, Navalny is the only person, who can restore Russian democracy, create an institution of unquestionable compliance with laws and restore justice in general. And then ... Then he can safely go on well-deserved retirement in the regenerated country.

"I do not like Navalny's nationalism and his letters signed with Bondarik. I do not like it when he behaves arrogantly and haughtily. But we must support him, because with him we will conduct a political reform to ensure changeable power in the first place, a return to fair elections, federalism and local self-government."

Why did Mr. Nemtsov have to use such epithets? It seems that everything is very simple. Nemtsov, formerly a resident of the Kremlin, understands: he himself has no chances to lead the "opposition." There are at least two reasons for it. First, Nemtsov knows that he is not so energetic and charismatic as Navalny. Secondly, the "creative class," which is considered to be the main electoral support of white ribbons (the opposition movement) consists mainly of young people, who hardly know anything about Nemtsov.

An older generation of Russians remember Boris Nemtsov and his role in "the formation of the Russian statehood." Those people had to live for months without salaries while Nemtsov's government was building its own Statue of Liberty, which now Navalny is destined to rebuild. Nemtsov can not lose Navalny, because he then will have no one to follow. This is the moment when all tools seem to be good. In other words - "we see all the oddities and inconsistencies and stupidity, like you see them, but we will now explain to you why you should not listen to yourself."

However, such statements, in spite of the above, were not based on a sudden desire to explain everything to the people. Nemtsov wrote nothing about the polls, the results of which were published on July 23rd. According to the poll, conducted among Moscow residents, only nine percent of respondents want to see Navalny in the mayor's office. As many as 54 percent of Muscovites voted for Sobyanin. Nemtsov has not written a word about it for one simple reason: he predictably considers this information corrupt and false, created to please the authorities. Maybe. However, after the case of Kirovles, 90 percent of respondents said that they did not trust Navalny. Yet, his name became recognizable to a lot more people, but this is an achievement of the media.

Nemtsov, a former prime minister of the Yeltsin era, finds support with his colleague, Alfred Koch.

"In any case, under the presence of efficient democracy, he will have no chances to seriously abuse power. How can we do this? I don't know ... maybe we can use Navalny as a club, to force the authorities to run these reforms. Maybe we can bring Navalny to power and he will do it himself. This, in fact, does not matter. The most important thing is that we have no one else, but Navalny, who can handle today's state of affairs," Koch said.

This is quite an interesting position. A know-how in pre-election conspiracy: Navalny comes to power, to dump everything afterwards. Thus, the supporters of Alexei Navalny rush to throw themselves under the bus, having realized that the people finally started asking the question of who is Mr. Navalny. No one was asking this question before, for quite a long time. Epople started asking this question, when it was said that the heretofore unknown Navalny could chair the Moscow government. So who is Mr. Navalny? This is a mature and timely question, the answer to which came from an unexpected side.