Putin in the Arctic: Your turn, Mr. Trump

Relations between Russia and the United States were the main topic of the international forum "Arctic: Territory of Dialogue" that opened on March 30 in Arkhangelsk. In addition to  economic and ecological problems of the Arctic region, most people present at the meeting wanted to know what the future meeting between Presidents Putin and Trump may lead to. 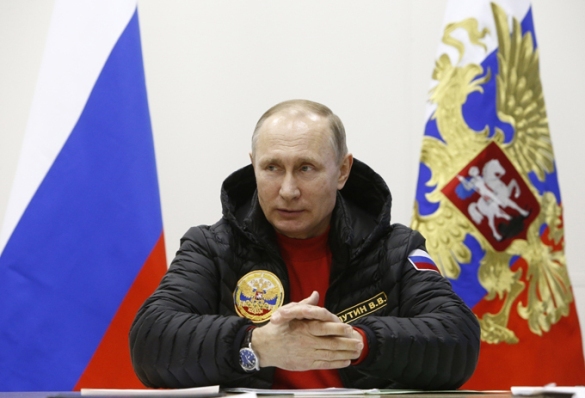 The participants of the plenary session were hanging on Putin's words when he was speaking about Russia's relations with America. They were reading his lips when he was answering the question about Russia's alleged interference in the presidential election in America. Putin reminded that President Reagan, when discussing taxes, addressed the Americans saying: "Read my lips: No."

What did the international audience hear?

First of all, they heard that Putin would be sincerely happy to restore Russian-American relations in cooperation with Donald Trump.

Secondly, if it does not happen, and the relations between the two powers continue to worsen, history may repeat itself, and the world may return to the situation of the Caribbean crisis, when the USSR and the US found themselves on the verge of a nuclear war.

Thirdly, they heard that Russia and the United States were already establishing practical cooperation in the war against terrorism in Syria. Putin stated that Moscow was ready to establish cooperation with the Pentagon and the CIA at this point.

Fourthly, Putin is ready for a Trump-style discussion, he is ready to understand his logic. For example, Putin was easy on the decision of the new US administration to refuse from its obligations under the Paris Treaty.

In this connection, Putin's reasoning on environmental issues is indicative. Thus, the Russian president does not consider global warming to be an exclusively man-made phenomenon. Moreover, Putin prefers to see not only threats, but also opportunities in the phenomenon of global warming. The melting of ice in the Arctic Ocean gives an opportunity for year-round navigation on the Northern Sea Route, for instance.

There were a few things that one had to read between the lines.

The meeting in Arkhangelsk showed that Russia intends to control all security issues in its Arctic zone, which, by the way, may soon expand significantly - by 1.2 million square kilometers.

As for security, both President Putin and Foreign Minister Lavrov said during the conference that Russia assumes responsibility to ensure security for all who will work with us in the Arctic region.

Putin noted that both Russia and America were interested in the safety of navigation in the Bering Strait. This strait is the gateway to the Arctic, particularly for China that has been building its own icebreaking fleet recently. At the same time, Beijing does not hide its claims to the Arctic states, which, as top Chinese officials say, want to monopolize the last unopened storeroom on the planet.

It's no secret that President Trump sees China as America's main enemy. He is allegedly ready for peace and friendship with Putin, if only he could turn his back on Beijing. Putin responded that he had nothing against the participation of non-Arctic states in regional projects, if they could do it in compliance with norms and rules.

Generally speaking, the forum in Arkhangelsk was largely devoted to Russian-American relations. US ambassador Tefft, whom Putin noticed in the audience, will have something to report about to Washington.

Today, after all that has and has not been said in Arkhangelsk, it appears that the ball is on Trump's side. If Trump seriously intends to conduct a substantive dialogue, he will have to react quickly: the meeting of the two leaders should take place before the G20 summit in Germany in July. If there is no dialogue before July, the agenda may change, and the Kremlin may take it as a sign of Trump's reluctance to talk to Russia or his inability to act independently under the pressure of the forces that continue to fan anti-Russian hysteria.