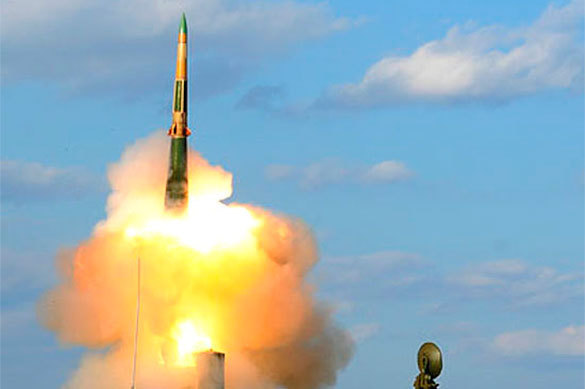 The complex was passed into service in 2016. The system is a modernization of Buk-M2 anti-aircraft system, designed to intercept all types of aerodynamic maneuvering targets, including drones and cruise missiles under the conditions of active fire and electronic countermeasures at distances of up to 70 km and altitudes of up to 35 km with a target speed of up to three km/s.

According to Novikov, during a short period of time, the company managed to create a product, the key performance indicators of which were 1.5 times higher than those of the previous generation.

"We are not resting on our laurels and have already begun developing the next generation of medium-range anti-aircraft missile systems," Almaz-Antey CEO said.

Buk's target acquisition radar accompanies up to 36 targets at a distance of up to 70 kilometers at all altitudes. The complex is armed with 9R31M rockets that boast a higher speed and maneuvering characteristics in comparison with older missile models.

The performance of the S-350 "Vityaz" system outstrips the S-300 considerably. The Vityaz system was unveiled to the general public at MAKS airshow in 2013. The complex is a self-propelled launcher that carries medium-range missiles used in the S-400 air defense missile system, as well as short-range missiles.

The Vityaz SAM also has an all-aspect radar and a command post on the basis of BAZ special vehicle.

Almaz-Antey also makes Buk-M2E complexes capable of striking aerodynamic targets at a distance from 3 to 45 kilometers and at altitudes from 15 meters to 25 kilometers.

The Russian army also has short-range anti-aircraft missile and gun system Pantsir-C1 that can strike targets at altitudes of up to 15 kilometers.

In addition, it is worth recalling Russia's renowned large and medium-range S-400 systems, which is capable of striking aerodynamic targets at a distance of 400 km and tactical ballistic targets at distances of up to 60 km.