Russia and China: Plethora of opportunities

Russian President Vladimir Putin concluded his official visit to China. The head of state held meetings with Chinese leader Xi Jinping and other representatives of the top political leadership of China. 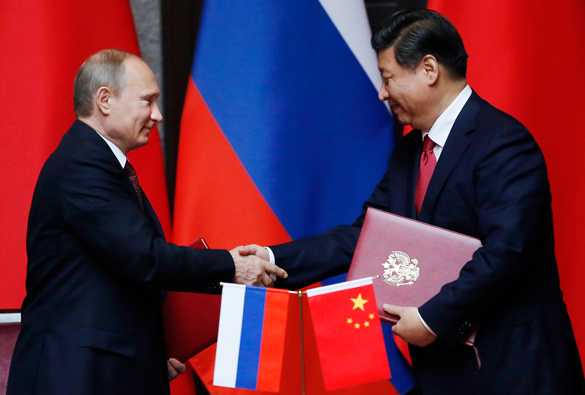 "The results of President Putin's visit to China have fully demonstrated the closeness of the current Chinese-Russian relations, as well as the unity of the two countries," Foreign Ministry spokesman Hong Lei said today.

According to Nikolai Kotlyarov, Director of the Russian-Chinese Centre of the University of Finance at the Government of the Russian Federation, believes that Putin's visit to China brought fruitful results.

"In my opinion, the visit was fruitful. A variety of contracts were signed for the production and processing of liquefied natural gas, production of oversized helicopters, construction of a high-speed highway between Moscow and Kazan and many others. Leading Russian and Chinese companies will be involved in the implementation of these projects. in addition, issues of financing are being discussed. China insisted to have state guarantees for loans, but the sides agreed to work in a slightly different way. We will see the profitability of the new projects as they materialize," the expert told Pravda.Ru.

Also read: Russia and China to free the world from dollar peg

During Putin's visit to China, Russian oil giant Rosneft agreed to sell 20 percent of shares of Russian oil company Verkhnechonskneftegaz to China's Beijing Gas. Chinese company Sinopec plans to buy up to 49 percent in the development of Yurubcheno-Tokhomsky and Russian fields that belong to Rosneft.

China invests a lot in Russia, but there is not much information about Russia's business presence in China.

"Russia builds a nuclear power plant in Taiwan - two power units have been launched with Russians participation. There were projects on the production of aluminum, but the project has faded away for the time being. Rosneft takes part in the construction of an oil refinery and plans to enter the distribution network in China. One can not say that the scale of Russia's investment cooperation with China is large enough. China's investment in Russia is insignificant, and Russia's investment in China is even more insignificant. Yet, Putin's visit to China will give an incentive to this cooperation. On the eve of Putin's visit, an intergovernmental commission gathered for a meeting and 50 co-financing projects were selected," Nikolai Kotlyarov told Pravda.Ru.

During the visit, a lot of attention was paid to the creation of a free trade zone between China and the EAEC.

"The best option now would be to create China's representative office at the EAEC Commission to elaborate the conditions of China's accession to the project to be able to discuss the creation of a  free trade zone," Nikolai Kotlyarov said.

Also read: Russia and China can overcome everything together

The Bank of Russia and the People's Bank of China signed a memorandum on the establishment of a Russian settlement and clearing center for transactions in yuans. The Chinese currency may replace the euro and the dollar in international payments.

"I do not think that the yuan has the potential to compete against the dollar or the euro. Yet, as long as the yuan was included in the basket of reserve currencies, banks will be required to have yuan-nominated reserves. The use of the yuan has been expanding, but I do not think that it will reach even 40-50 per cent in the foreseeable future, Most likely, it will remain on the level of not more than 20 percent," Kotlyarov said in an interview with Pravda.ru.

According to the signed contracts, Russia will export primarily agricultural products to China, wheat in particular.

"In the course of Vladimir Putin's visit to China, it was said that the shipments of Russian mechanical equipment to China have increased by 40 percent. The trade turnover between Russia and China has declined due to the fall in energy prices, but the situation may improve. For the time being, though, the nomenclature of Russian exports to China remains the same," said Nikolai Kotlyarov.