The project documentation for the construction of the bridge across the Kerch Straight, between mainland Russia and the Crimean Peninsula, has finally been approved officially. The accuracy of the estimated cost of the project has also been confirmed. 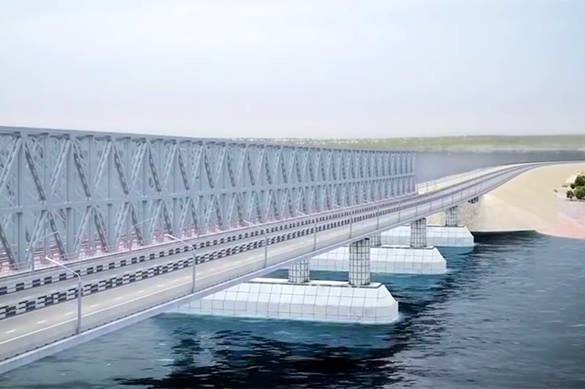 The construction of the Kerch bridge will cost 211.851.575,730 rubles. The amount is almost 680 million rubles less than the marginal cost of the works established by decree of the Russian Government on 30 January 2015.

More than 30 experts of the state expertise department, Glavgosexpertiza, were involved to check the documentation. The same number of experts worked to verify the accuracy of the estimates. Auditors also came to positive conclusions as a result of their work.

Such a large "army" of specialists who were involved in the works to check the papers and calculations is explained with more than 570 volumes of documents that had been drawn up for the project. The electronic version of the documents makes up 30 gigabytes. Paper and electronic carriers contain information about the area of the construction, engineering survey results, basic design and technical solutions for environmental protection, etc.

The bridge across the Kerch Strait, apart from the unconditional political and economic importance of the construction, is a unique and large-scale creation.

The head of the Federal Road Agency, Roman Starovoit, said that the balance of quality, cost and timing was the main priority in the project.

"Titanic work has been done since the time of the conclusion of the state contract.  The bridge to the Crimea will be the longest in Russia - the bridge across the Kerch Straight will be 19 kilometers long. All the necessary temporary infrastructure required for such a large-scale construction has been created, so we can start the construction of the bridge," the official said.

The bridge consists of two parallel structures for automobile and railway traffic.For the railway section, engineers have designed a special combination of superstructure, open main trusses and arch to ensure the required reliability of the bridge.

Holiday season in Crimea to last all year round

The construction of the automobile road approaching the Kerch bridge from the direction of the Krasnodar Territory began in October 2015. A 40-kilometer highway will be built to connect the future bridge with M-25 highway.

Meanwhile, Russia's Federal Tourism Agency suggested making the holiday season in the Crimea a season that would last 12 months a year. However, one needs to create appropriate infrastructure for such an objective.

Deputy head of the Federal Tourism Agency Alexei Konyushkov, speaking at the Krasnoyarsk Economic Forum, proposed to increase the tourist season in the Republic of Crimea. According to the official, there is no sufficient demand for holidays in the Crimea during the summer period. Therefore, one must find an alternative way to attract Russians to the region.

"There is only one way out - one needs to extend the holiday season and create year-round accommodation facilities," he said.

For the time being, there are about 770 hotels in the Crimea today. However, a half of them work only in the summer time. In the current circumstances, when one needs to redistribute the flow of tourists who used to go to Turkey and Egypt for holidays, the existing facilities on the peninsula are not enough to meet the demand.

Earlier, the Association of Russian Tour Operators provided positive data about the perception of holidays in the Crimea. Most of the tourists, who went to the Crimea in 2015 (92%), said that they would be willing to go there again in 2016. Only six percent of respondents have not yet decided on the future holiday destination, whereas two percent intend to choose another place for holidays.

Among those who plan to re-visit the resorts of Crimea, 53 percent said that they were satisfied with the infrastructure and the cleanliness of the region.