Ukrainian officials said that the country needs to recognize the existence of war between Russia and Ukraine to gain the support of the international community, a representative of Ukraine in the political subgroup of the Trilateral contact group at the Minsk talks, Roman Bessmertny, told Ukrainian reporters. 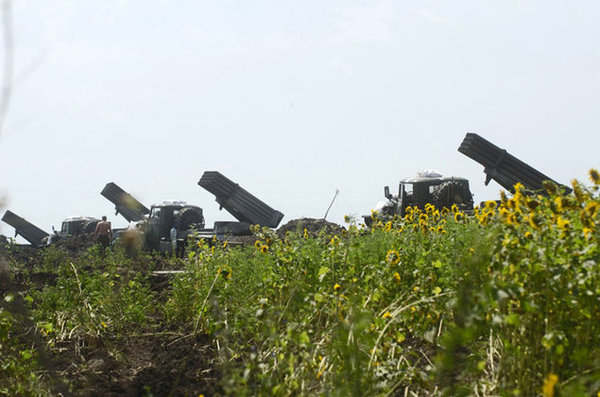 "We can ask for help, and we need to get ready for a serious and long-term confrontation with Russia, he added. " "One should call it the way we see it. Why? Because we have prisoners of war referred to as illegally detained individuals, the fighting on the front lines is called the anti-terrorist operation, and the measures taken by the UN are called a humanitarian campaign. Therefore, we have a problem with the involvement of international security elements. It is only if we call a spade a spade when we can count on the honesty and openness of both European and international communities," the official said.

"Geopolitically, security policy requires major changes on the European continent. Today, it withstands no criticism. If it wasn't for the North Atlantic bloc that supports the coordination between European security structures, we would have nothing to talk about at all today," Bessmertny said.

In the official's view, the Syrian crisis is closely connected with the Ukrainian one. "The steps that Russia has been making in the international arena, particularly in Syria, attempts to restore the conflict in Nagorno-Karabakh, the situation in Transnistria and Moldova, absolutely destructive actions on the European continent, support for left and right-wing forces, the involvement of Russian Orthodoxy, the huge information expansion in the European market - these are the problems that one has to deal with," he said.

Of course, the Ukrainian official could not but use the word combination "Russian aggression." "Above all, we need to find the answer to the question of how to protect Intermarum countries from the Russian aggression as they are the first countries to take the blow geographically," the official said.

According to him, there are two ways that Europe can go. "Either the Ukrainian-Russian conflict makes Europe even stronger, or Europe will split in the Ukrainian question. One should not forget that the Ukrainian issue stands separately from the crisis in Syria. They are all parts of global policy and crisis."

Noteworthy, Ukrainian Prime Minister Arseny Yatsenyuk spoke about a possibility of war with Russia at a meeting with security officials and governors. Yatsenyuk said that Ukraine needs to make "mobilization plans to prepare the Ukrainian economy for war conditions."

"Unfortunately, not all regions have approached the issue reasonably. Every region should prepare a final mobilization plan for the national economy in the event we need to switch to war conditions," the Ukrainian prime minister said.

International and Russian experts said that declaring martial law could be possible only if Ukraine officially declared war on Russia. If Ukraine does declare war on Russia, Ukraine will have a few days or weeks to exist.

Meanwhile, Russia banned the movement of Ukrainian trucks on the Russian territory after Ukrainian radicals blocked toads for Russian 10-wheelers in the west of Ukraine. As a result of the scandal, the Kiev authorities announced the suspension of transit traffic of Russia-registered heavy trucks.

Ukrainian Prime Minister Arseniy Yatsenyuk claimed that Russia violated the rules of the World Trade Organization when the Russian authorities single-handedly banned the movement of Ukrainian trucks on the Russian territory.

The Kremlin has released an official comment about the transit of Russian heavy trucks via Ukraine. "This is a question of extreme importance. Of course, it is absolutely outrageous, when such acts are committed against our carriers with the connivance of the Ukrainian authorities. This is, of course, unacceptable," Putin's official spokesman Dmitry Peskov said.

"We believe that the Ministry for Transport takes vigorous measures to unblock this situation and ensure an adequate response in the event the undesirable situation continues," said the president's press secretary.

Russian Prime Minister Dmitry Medvedev said the Ukrainian side took "disgraceful" actions to block the movement of Russian heavy trucks on the territory of Ukraine.

Meanwhile, Ukrainian Minister for Foreign Affairs Pavel Klimkin said that Kiev would not let Russia carry its goods to the EU via the territory of Ukraine.

"There are many EU transit issues that we must consider. We must see every aspect separately, on the basis of international law. We are a state governed by the rule of law and we will not act like Russia. At the same time, we will take appropriate care of our own interests, and Russia will not be able to take its goods to the EU via Ukraine just like that," Klimkin said.