After the terrorist attacks on November 14 in Paris, many countries have strengthened anti-terrorism measures, and Russia was no exception. All agencies of the Interior Ministry, the Federal Security Service, a number of units of the Defense Ministry and other special services work at full capacity. 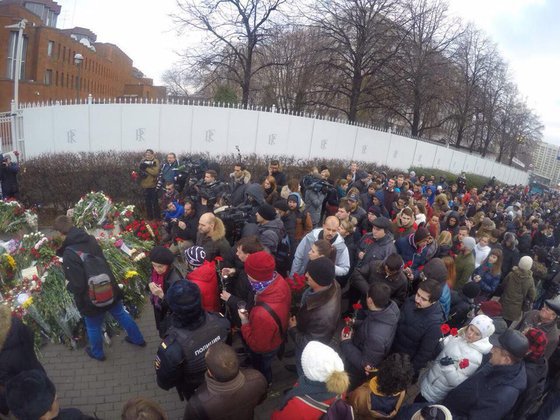 Multiple checks of educational and cultural institutions, transportation hubs and other public places have been launched all across Russia. Control system of suspicious communications that allow to reveal terrorists' plans in advance have been activated.

In pictures: Terrorist attacks in Paris

On Saturday morning, first deputy chairman of the Federation Council Committee on Defense, Yevgeny Serebrennikov, announced the need for additional security measures in the country.

All public events that were scheduled to take place in Moscow for November 14 have been canceled.

The Ministry of Transport reported that the Russian Railways was instructed to introduce additional security measures at railway stations and on trains.

People started gathering near the French Embassy in Moscow at night, when news about the terrorist attacks in Paris appeared. Hundreds of people continue coming to the building of the Embassy of France in Moscow, bringing flowers, lighting candles and leaving notes of condolences.

Officials at the French Embassy have expressed gratitude to Russian citizens and Russian officials for their many words of sympathy. A message of gratitude was posted on the website of the French diplomatic mission.

In pictures: Russians crying for France

Earlier, Russian President Vladimir Putin expressed his condolences to his French counterpart Francois Hollande in connection with the killings of dozens of citizens of the French Republic. The Russian president also said that Russia was ready to provide any assistance in the investigation of circumstances of the tragedy.

At night of November 13, a group of suicide bombers conducted a series of coordinated attacks in different areas of the French capital. The terrorists have killed over 150 people and wounded 200. As many as 80 people remain in critical condition.

On Saturday, Russian Foreign Minister Sergei Lavrov met his US counterpart, US Secretary of State John Kerry, in Vienna, Austria. The Russian diplomat urged to abandon tolerance when it comes to terrorism, Interfax reports.

"Russian President Vladimir Putin has expressed his solidarity with the people of France. We do not forget the terrorist attacks in Iraq and Beirut that have claimed many lives. We can not be tolerant to terrorists. There can be no justification for the actions of terrorist attacks. There can be no justification for the Islamic State, Al-Nusra Jabhat (these organizations are banned in Russia, and the like," Russian Foreign Minister Sergei Lavrov said.

John Kerry stated that the terrorist attacks in Paris were acts of modern fascism.