The problem of Donbass residents' legal status is quite serious. While Ukraine does not need these people, simplified procedure to get Russian citizenship will be put into effort. Denis Pushilin, Vice Chairman of the People's Council of the Donetsk People's Republic claimed that Abkhazia-, South Ossetia-, and Transnistria-like passportization is going to be introduced. 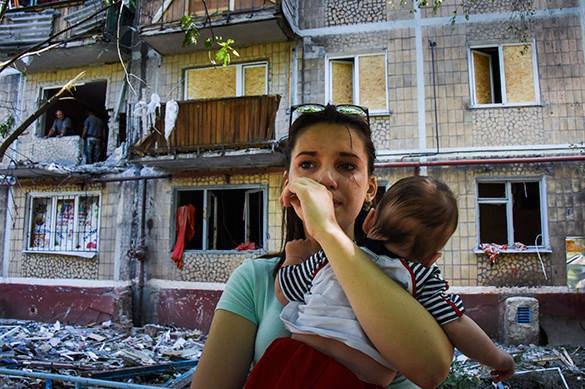 Vladimir Karasyov, an economist and political scientist from Lugansk commented on the issue to Pravda.Ru.

''This initiative was launched long ago, and many proposals have been put forward so far. The President also signed a law in August, allowing those having been born in Russia to receive citizenship at once. Those who studied or graduated in Russia can also use this opportunity.''

1.5 - 2 million refugees are reported to have fled to Russia so far.

Young people who turn 16, the age of obtaining passport in Ukraine, do they get this document now?

''No, Donbass residents can only receive citizenship of Donetsk or Lugansk People's Republics. But these documents are not valid to enter the Russian Federation.''

So, Kiev abandoned its citizens, didn't it?

''Yes, the only way for them is to go to the Ukrainian consulate in Rostov and pay great money to receive Ukrainian passport. Not everyone can afford it. Thus, it turns out that young people do not have a possibility to study in Russian colleges, or just leave Donbass.''

''Eight million people living in Donbass are all ours, as President Putin used to say many times. I hope that other Russian top politicians, as well as Foreign Minister Lavrov, who always stands for Donbass residents, will also get involved.''

Do Donbass residents have any possibility to get Ukrainian documents, information, or everything is closed?

''Ukrainian structures closed everything long ago. There is nothing there. And the new Republics are recognized only by some states. That is why any Republican documents even notarized and certified with LPR or DPR seals will not pass in Russia. I believe Ukraine faces collapse and a parade of sovereignties in the near future. Then these new entities will be recognized by other states.

Donetsk and Lugansk regions are historical territories of the Russian Federation. They even used to be part of the Rostov region. So, we'll have to carry out a referendum once again. Then it will be not only possible to enter Russia, but to adhere to the Rostov region.

Donbass may also enter the Russian Federation as a single entity. It is evident that about 95 per cent will vote for at the referendum, as it was shown in the Crimea. Present Ukraine demonstrated that it can only annihilate people.

Those living in Donbass are very hard-working people, hard labour in metallurgy, coal and chemical industries have been present there for generations. Donbass will boost Russian economy, as it used to be a fount of minerals and ore minerals in the former Soviet Union. Ukraine just did not have money and technologies, as well as any desire to develop Donbass. In Russia it is possible.

From the very beginning people were sure 300 per cent that they would go after the Crimea, but it did not happen, the Americans hindered them. Nevertheless, people still believe that the militants will liberate Donbass from the Nazis, then the referendum will take place, and they will return back home to their Motherland. And their Motherland is Russia, this territory just was passed to Ukraine, and people living there were not asked of their opinion.

At the beginning of the XX century, when there was famine in Russia, Lugansk people called for collecting and sending aid. There are even appropriate posters of those times in the Russian museums. Donbass rescued poor, starving and struggling regions. It was in 1915, just 100 years ago. We have always been a part of Russia and lived for Russia.''