Fight for Freedom - US vs Donbass 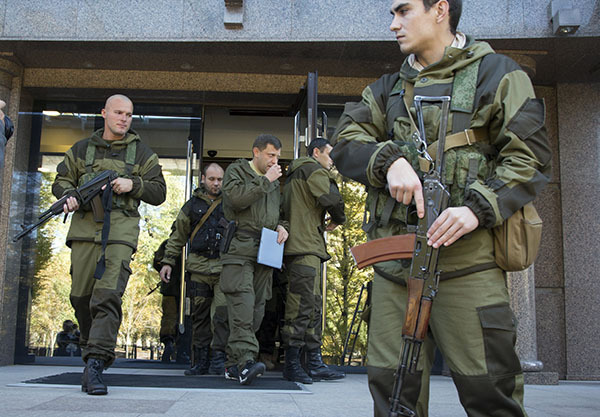 US foreign policy is choking the whole earth and at the same time has caused America to implode. They panic when they see the rise of Russia's economy and almost limitless resources that give cheap gas to Europe and the world. The CIA pays off some and brainwash the weak to overthrow the government in Kiev then causing a civil war. They manage to call civilians "terrorists", so it's easier to murder their own people in SE Ukraine. This has forced the people of Donbass to fight like a pack of wolves backed into a corner.

It's a mad upside down world where the US brainwashed its people to believe that Putin had invaded Ukraine while people from Donbass want Putin to intervene militarily to stop the US backed Kiev forces. They are begging Putin to stop the war. SE Ukraine begs Russia to help. Millions have fled to Russia from Ukraine including Kiev soldiers who were disillusioned with the war. Russia is a safe haven of peace. When Hitler invaded Poland the refugees that escaped did not go to Germany. People of Donbass do not flee to the US.

Many feel betrayed by Putin for saving Crimea and not Donbass. Putin asked Poroshenko for peace and organized the Minsk peace talks. Even though Putin sends food, water and medical supplies by truck convoys, many are still unhappy more is not done. Even Putin's childhood friend, Venzin Vladimir Alexandrovich has changed his view about Putin.

In a video Alexandrovich said, "Now people are cursing him (in Gorlvoka, town near Donetsk)... a year ago we all would turn our TV's every morning waiting to hear that Russia has started sending its troops. Now, people simply spit when hearing the word "Russia" because Russia has betrayed Donbass." Venzin would laugh if he saw the media mantras on US TV stating that Putin invaded Ukraine with Russian troops. If Russian troops were in Ukraine he wouldn't be upset with Putin and Donbass would be safe and sound like Crimea.

The Donetsk People's Republic (DPR) had gone on the offensive last February and created a Debaltsevo Cauldron. Anna News reported 8,000 Kiev troops were surrounded and their destroyed equipment was put on display. According to ITAR-TASS , militia headquarters reported "Around five thousand servicemen with weapons and around 50 tanks, more than 200 combat armored vehicles... were blocked in the trap,". The US forced Poroshenko to scream for a ceasefire while the US soldiers train his military. It was a great victory when the Debaltsevo pocket was closed.

Unfortunately, the recent Minsk ceasefire agreement that was agreed to by both sides of the Ukrainian civil war lasted about an hour. It comes as no surprise as the first one was broken as well. The puppet president who was placed there by Obama never had any intention for peace. Genocide is their goal and the people of SE Ukraine in Donbass know it. When the devil tells you he wants peace you better prepare for war.

I have no idea why they even try to bargain with this monster Poroshenko. He is backed by another monster, Obama from the US who is a puppet himself doing the bidding of Soros, Rothschild, Rockefeller and other elites in the West. America is where paleface speaks with fork tongue. How many treaties did the US break with the natives?

Alexander Dugin in his "Letter to the American People on Ukraine" writes, "The American political elite has stolen, perverted and counterfeited the American identity. And they make us hate you and they make you hate us... - the global oligarchy who rules the world using you and smashing us. Let us revolt. Let us resist. Together, Russians and Americans. We are the people. We are not their puppets."

Donbass is not happy with President Putin but he does his best to secure stability in the world with economic success while the US creates wars and discord like pyromaniacs. Obama smiles and laughs to his worshippers while elusively avoiding any blame. After all, he's trying his best. His best to oust Assad and fulfill his masters plan of conquest in the Middle East. "Assad must go!" and "What difference does it make!, Clinton shouted. Pure madness displayed for all to see that extended to Ukraine.

A former member of the Ukrainian parliament in Kiev, Oleg Tsarov, warned us all, "American instructors presented examples of successful use of social networks used to organize protests in Egypt, Tunisia and Libya. Recent conference took place Nov 14-15, 2013, in the heart of Kiev in the Embassy of the United States of America! Is it conceivable that the representatives of the US Embassy which organized the 'Tech Camp' conferences, misuse their diplomatic mission?"

Yes! The US certainly does misuse their diplomatic mission. That is why many in Kiev this year protest the US Embassy like mad dogs. Even Kiev officers are defecting. Almost every week angry mobs come by the hundreds and the thousands. They protest America standing in the rain mooing like cows with a sign, We are not cattle!. They thank the weasel Ambassador Geoffrey Pyatt for bringing war and poverty. He's lucky they haven't dragged him in the street like the US ambassador in Libya. On June 25, in this video, they made demonstrations with raw meat.

They said at the protest, "We, the youth of Ukraine... gather near the USA embassy in order to tell them: Americans, enough with interference  into internal affairs of Ukraine! Enough with killing our people! Enough with financing the war in Donbass! Enough with terrorizing our Motherland and all other Slavic states! This protest is called "Give your heart to United States". Symbolic countries you see here are Ukraine, Syria, Iraq, Libya, where paid USA so-called revolutions took place. People believed this nation! And look, what they have done to them! They drowned them in blood, they destroyed the infrastructure!

Another protester said, "Two years ago, when I was watching videos from Syria I couldn't imagine that the same could happen in my country. That people will be dying, that cities will be destroyed. But unfortunately, after the coup d'etat on Maidan our country burst into fire of the civil war."

Donbass has had no choice but to fight. Oleg Tsarov wrote about another victory, "We won because God is with us and the truth, but we are not gloating. As a Ukrainian people we wish a speedy liberation from the occupying regime. After using Poroshenko, America occupied the Ukraine and tried to occupy us. Our common duty is to free Ukraine from Nazi power and give back to the people their country and to punish those responsible for inciting fratricidal war. We will win - no doubt about it."

The spirit of this struggle has been captured in a video by News-Front called "Donbass Defenders - "My palm clenched into a fist".  Great music, powerful, mixed with the truth. It is an expression of their defiant struggle sung by Polina Gagarina. "Oh sun of mine - break through the darkness...My open hand has turned into a fist. And if I have gunpowder - then give me a spark...Like this. Who will now follow the lonely trail? The strong and the brave stood firm in the field - and died...Few still remember,  of firm body and mind - few stand in our line... Oh Sun of mine, break through the darkness... My open hand now turned into a fist. If I have gunpowder - just give me a spark.... Like this. Freedom... - where are you now? Whose sunrise do you shine on? Answer me!!"

The song was not translated in the original so we found one video with the lyrics in English called "Open Hand Now a Fist" to Kiev,USA". One day the world as one fist will defy the US. On that day the world will know freedom. The country that claimed to give freedom to the world will have its yoke over humanity broken by those nations it murdered. It has begun at Donbass and will make history.

Fight for Freedom - US vs Donbass