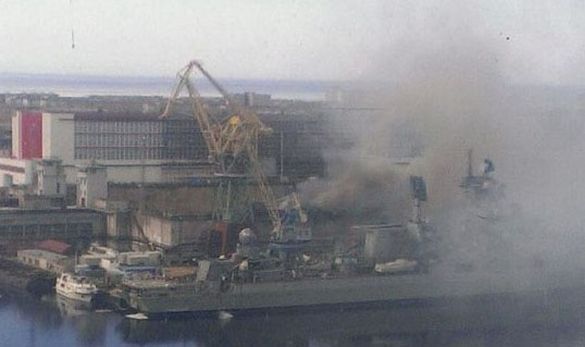 A fire has recently occurred on board the Orel ("Eagle") nuclear submarine in Russia. The fire sparked during welding works in the area of the ninth compartment. Andrei Mikhailov, a military observer of Pravda.Ru in Severodvinsk, became an unwitting eyewitness to the incident.

"I saw from my window that the submarine was on fire. The Oren submarine, Project T-949A, is in the dry dock of Zvezdochka Shipyard in Severodvinsk. She came to Severodvinsk for repairs and upgrade in late 2013 and was expected to leave in 2016. All systems of the vessel are subject to repairs and modernization -  navigation, sonar and arms systems. The Orel submarine carries cruise missiles. Its underwater displacement is about 25 thousand tons, and surface displacement - 22 thousand tons. In other words, this is a very large submarine," Pravda.Ru correspondent in Severodvinsk Andrei Mikhailov said.

Submarines to be replaced with underwater tanks?

The correspondent noted that several submarines of this class had been under repairs at Zvezdochka Shipyard before. The nuclear fuel from two nuclear reactors of the Orel submarine had been unloaded before the submarine was placed in the dry dock. Cruise missiles torpedoes and all aggressive liquids - turbine oil and diesel fuel had been removed from the submarine as well. According to Mikhailov, such fires happen very often, especially on US submarines.

"The Americans even took lessons from us on how to ensure the survivability of a vessel ship in a state of repair. According to the chief to the press center of Zvezdochka Shipyard, Yevgeny Gladyshev, the fire occurred during welding works between the outer and the pressure hull in the area of the aft compartment 9. The rubberized anti-noise insulation caught fire. The sonar coating on the submarine is at the top of the outer hull. There was a thinner layer of rubber between the outer and the pressure hull. Such things occur frequently during hot works, and it is not clear why such a fuss in connection with the ignition," the correspondent said.

Andrei Mikhailov said that as soon as the fire started, all the workers and part of the crew were immediately evacuated. "During repairs and modernization, the crew members remain on board, but not all of them. A part of the crew remained on board the submarine to prevent the fire from spreading inside the hull. Eight fire brigades of Zvezdochka Shipyard took part in the operation to extinguish the fire. They arrived on the scene in two minutes. According to the chief of Zvezdochka press service, Yevgeny Gladyshev, there is no sense in looking for the guilty, because it was not an emergency situation."

However, a criminal case was filed into the fire on board the Orel nuclear sub. The case was filed in accordance with Art. 216 of the Criminal Code - "violation of safety regulations during the works that entailed major damage by negligence."

The reactor of the submarine had been shut down, cruise missiles had been removed. No radiation hazards arose. To extinguish the fire, it was decided to flood the dock, in which the submarine was staying.

According to most recent reports, the fire on board the Orel submarine caused the damage of more than 100 million rubles. the fire damaged the descent and ascent systems of the submarine.