Russia's new rail-mobile missile system will be called "Barguzin." The new system will expand the line of existing missile systems of Russia and strengthen the defensive capability of our country. Missiles for  the Barguzin complex will be built on the basis of the Yars ICBM. 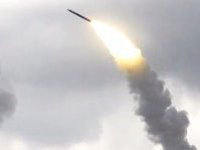 It is hard to say, whose idea it was originally to put an artillery gun on a railway platform. However, it is well known that such weapons were used in the years of the American Civil War in 1861-1865. Later, the British used armored trains in Sudan and in the Anglo-Boer War.

The Germans used them against the French during the Franco-Prussian war. Afterwards, there was WWI and the Civil War in Russia, in which both Red and White troops used armored trains. The French, for example, during the First World War, put 520-mm howitzers on a railway platform, and it was truly an impressive weapon! However, back during those years, there were no missiles on railway platforms.

First missile-equipped armored trains were created in the USSR, when "Katyusha" launchers were mounted on several armored trains to significantly enhance their combat power.

The Germans, who created the world's first liquid-fuel ballistic missile V-2, were the first to think of a technology to launch missiles from submarines and railway platforms. There was a special project developed, according to which a missile would be mounted in one carriage, and tanks of liquid oxygen and kerosene would be placed in another carriage. A train of 20 carriages (plus one for personnel and control systems) could thus carry up to ten missiles aboard, although the Germans did not have time to materialize their plans.

Then came the arms race between the United States and the Soviet Union, when the Americans tested a rail-based system, although they never put it in service. The most impressive project called M-X (Rocket X) was also developed overseas, but the project never saw the light either, as the Americans decided that their famous nuclear triad was enough.

The essence of the project was to save their missiles from Soviet missiles. One of the options of the project was about an underground ring railway, on which a missile train was running. It would be impossible to see the missile from above, whereas the concrete roof was protecting the "ring" from a close nuclear explosion. To launch a rocket, special jacks would open the concrete roof from the inside and the rocket would rise for launch. The costly project did not have a chance to become reality. It became irrelevant after the collapse of the USSR.

In the Soviet Union, the story was developing differently. The order to design a mobile rail-based missile system (known for the Russian initials as BZHRK) with the RT-23 rocket was signed on January 13, 1969. The Soviet military assumed that the BZHRK would form the basis of a retaliation group, as the complex had increased vitality and could survive an enemy strike. The system was called BZHRK 15P961 "Molodets." Today, the system remains an exhibit at the Central Museum of the October Railway at the Varshavsky Railway Station in St. Petersburg.

During the time of "reconciliation" with the United States, the complex was eliminated. Today, however, "an armored train with missiles" does not seem to be a burden. Thus, the Russian Strategic Missile Forces (RVSN) will include not only mine and ground-based, but also rail missile systems.

Presently, the Russian Strategic Missile Forces have such ICBMs as Topol, Topol-M and Yars. State-of the-art Project 955 Borei-class submarines carry Bulava missiles. Topol missiles exist in mine and mobile design. The drawbacks of both of these forms of operation are obvious: the location of all mines is no secret, and the speed of mobile systems is not high at all. A train would be a considerable difference. At a speed of 100 km/h, a train can travel for 2,400 km a day. In addition, it would be very hard to detect a missile-equipped train among hundreds of other trains.

The "Barguzin" complex will remain in service at least before 2040. The starting weight of a new missile will not exceed 47 tonnes. The missile that will be developed on the basis of the Yars ICBM will be housed in a standard rail car. The new complex will look like a normal train with passenger and freight cars, in which all the necessary equipment will be installed.

The missiles that were used for "Molodets" complexes weighed more than 100 tons each. The cars with the launcher thus had to be equipped with special technology to distribute the weight load on nearby cars, which was, of course, problematic. The use of much lighter missile will cast all those problems aside.

As previously reported, the main element of the complex - the missile - will be developed on the basis of the Yars ICBM. The railway complex will be similar to the ground-based Yars, albeit with many missiles. If we take, for example, a 15-car train with five technical cars, Barguzin's one salvo will consist of ten missiles. A rail complex would be much cheaper than Borei submarines, even though a submarine of this class carries 16 missiles.

Today, the RS-24 Yars has three stages with the total length of about 23 meters. The starting weight is estimated at 45-49 tons. The maximum range - 11,000 km. Details of combat equipment are not available.

However, we know that the RS-24 rocket carries MIRV warheads with 3-4 individually guided combat blocks. That is, in the final stage, it divides into several combat units, including sham parts, with each of them flying to their targets.

The use of the extensive network of Russian railways makes such projects strategically mobile, as a missile train can be redeployed where necessary very quickly.