Russia has no plans to reopen radar station in Cuba

Russian President Vladimir Putin denied reports about the deployment of a Russian radar in Cuba's Lourdes. "In agreement with our friends, this center was closed, and we have no plans to resume its work," said the president, ITAR-TASS reports. 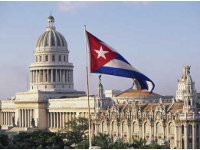 A day earlier, the Kommersant newspaper wrote that Russia and Cuba reached an agreement to resume the work of the radar center in Lourdes, near Havana. Russia closed the center in 2001, after the previous visit of Vladimir Putin to Cuba.

Responding to a question of whether the question was discussed during a visit to Cuba, Putin said: "No, this is not true." "We did not discuss the question. As for  grievances, you know, in international relations this is not an appropriate term, although this perhaps left a bad taste in the mouth for our Cuban friends after the abrupt termination of relations in the 1990s," Putin said.

Putin admitted that he did not feel any negative background with Cuban partners. "Moreover, unfortunately, we left, and our place was taken. For example, Canadian companies are active in the mining industry. Spanish companies work in the field of tourism," said Putin.

The Russian president said that Cuba is an "interesting place and an interesting country." "We have a very good relationship and a very good historical foundation. The country has achieved good results in the social sphere, education, in medicine. Overall, we have joint projects and plans," said the president of the Russian Federation.

The radar center in Lourdes (a suburb of Havana) was created by the Soviet Union in Cuba during the 1960s. The station was designed to monitor U.S. missile launches and serve as an electronic eavesdropping system. It was also used to maintain strong connection with Russian embassies in Latin America. The number of Soviet specialists in Lourdes was up to three thousand people.

In 1992, Cuba and Russia signed an agreement on the extension of the work of the center on the island for 20 years under a lease agreement. The rent was $200 million a year. As part of the payments, Russia supplied arms, spare parts for Soviet equipment, oil and timber.

In 1997, Russia modernized the center, which was the last Russian military facility in Cuba.

During an official visit to Cuba, on December 14, 2000, Russian President Vladimir Putin visited the radar center in Lourdes. A year later, Russia decided to close the center.

Russian officials said back then that the centers had been closed due to economic unreasonableness and technical contradictions to modern requirements.