The Leninsky Court of the city of Kirov brought down a verdict on charges of embezzlement in the company Kirovles. Opposition activist Alexei Navalny was sentenced to five years in prison. Another person involved in the case is former director of Vyatka Forest Company Peter Ofitserov - he was sentenced to four years. They were also fined 500,000 rubles each ($15,600). 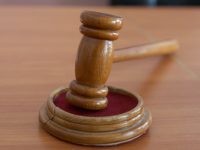 Former CEO  of Kirovles, Vyacheslav Opalev, received a four-year suspended sentence on the same case last year. Opalev pleaded guilty and came into a pre-trial agreement with the prosecution.

According to prosecution, in May and September of 2009, adviser to the governor of the Kirov region, Alexei Navalny, in collusion with director of LLC Vyatka Forest Company, Peter Ofitserov and CEO of Kirovles, Vyacheslav Opalev, arranged the theft of more than 10,000 cubic meters of wood. The damage was evaluated at more than 16 million rubles.

Prosecutors stressed during the debate that Navalny's and Ofitserov's guilt had been established. They therefore asked the court to sentence them to six and five years in prison and one million rubles of fine for each defendant ($31,000). The maximum period that threatened those involved in the case was ten years in prison.

In turn, the defense of the accused, and Alexei Navalny himself, insisted that they had not committed any crime. According to them, Kirovles concluded perfectly legitimate transactions. He also said that he, as an adviser to the governor, did not put any pressure on the administration of Kirovles either, and could not do it due to his limited powers. So Navalny and Ofitserov should be fully acquitted, their lawyers said.

Announcing the verdict, judge Sergey Blinov said that the guilt of the accused had been proved completely. He also rejected any sort of political motivations in this case.

The preliminary examination of the case of Kirovles began in August 2009. Alexei Navalny spent only a few months on the position of an adviser to the Governor, and then hastily left the city of Kirov.

Since the beginning of the trial in April, Alexei Navalny's supporters were doing their best to show that the allegations were absurd and far-fetched.

The thesis of "Alexey Navalny is not guilty of anything" would be stressed everywhere in popular Russian online publications. The criminal proceedings on the case were diligently creating a "political process".

We could witness something like this not so long ago, during the Pussy Riot case. It would seem that the two cases are quite different and have nothing in common. Yet, the "political side" of the two cases seemed to be quite profitable for the defendants and their lawyers, in both cases.

However, they thought it wrong. One of the Pussy Riot defendants, who managed to change her lawyers and received a suspended sentence, now leads a protracted war with her former lawyers.

As for Alexei Navalny's participation in elections, it now all depends on the decision of a higher court. There is no doubt that an appeal will be filed. Prior to its consideration and approval (or disapproval), Navalny can participate in the election campaign for the position of the Moscow mayor.

"If the verdict comes into effect before September 8 (the day of voting - ed.), that is, either Navalny does not appeal against it, or the court leaves the sentence of the Lenin District Court of Kirov in force after its consideration, then the election commission will have to exclude him from the list of candidates, cancel his registration, or strike his name out of ballot papers," executive director of the Russian Institute for Public Election Law, Alexander Ignatov told Pravda.Ru.

"If the verdict comes into force after the elections, then he is still involved in the elections is, because there is no verdict that came into force," said the expert.

Meanwhile, the election office of Alexey Navalny said that his candidacy would be withdrawn from the election. The final decision remains for Alexei Navalny to make.