Putin smiled to Jews. Will Jews smile back?

Russian President Vladimir Putin made a sensational statement during a visit to the Jewish Museum and Tolerance Center. He said that the decision to nationalize Schneerson library surrounded by never-ending scandals was made in the 1920s by the first Soviet government, 80 to 85 percent of whose members were Jews.

This assessment of the composition of the National People's Commissars is the first such statement made by the head of state. Neither in the USSR nor later such data was disclosed. These facts were treated, at best, silently, and often, for some unknown reason, were regarded as rabid anti-Semitism. Vladimir Putin has made quite a bold move that in addition to other labels generously placed on him by the opposition may add a label of a reactionary and Jew-hater.

Meanwhile, his visit to the Jewish Museum and Tolerance Center had quite noble reasons, and likely was long-awaited by the Jewish community of Russia. The Russian government has decided to meet the requirements of some Hasidic communities and give the said Jewish organization the Schneerson Library, a collection of Hebrew books and manuscripts from the 18th-early 19th century. Judging by the number - 12,000 books and 50,000 rare documents - they chose to meet the demands to the maximum extent. 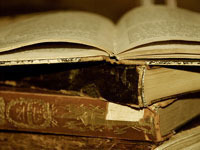 Earlier, an impartial legal analysis has shown that the demands of the plaintiff' representing American Hasidim were absolutely illegal under all norms, including international. Meeting them could actually lead to the loss of state sovereignty of Russia by opening a stream of similar claims regarding other objects, from estates to industrial companies and gold mines. The story of the library and respective claims of individual members of the American Hasidic have been ongoing from later 1980s. The story had pronounced aggressive national-religious overtones that could not hide clear material interests of the people behind this campaign.

In February of this year, President Vladimir Putin at a meeting of the Presidential Council on International Relations suggested the most constructive step under such circumstances - to place the unique collection of books in the Center of Tolerance. This would show respect to the norm of the law on the one hand, and on the other would meet Hasidic requirements of maximum accessibility of the sacred manuscripts and books.

However, the legal basis of such an act remained unclear, and active participation of Mr. Shvydkoy in the transfer of the library evoked sad thoughts about possible scheming around the unique collection.

Today the situation is clearer. A special library unit was created for the Schneerson Library in Moscow. It is located on the territory of the Jewish Museum and Tolerance Center and acts as a branch of the Russian State Library. This provides certain warranty that the collection will not be stolen and smuggled abroad. At the very least, people planning such a move must be aware that they would be committing a felony with all the ensuing consequences.

However, the most important thing is that Vladimir Putin has once again demonstrated that Russia's policy is aimed at preserving interethnic and inter-religious peace. The President of the Russian Federation believes it to be the basis for the existence and further development of the Russian state. The move of the Schneerson library that has great value not only for the Russian Jews, but also Jews living in other parts of the world into the territory of the Jewish Museum and Tolerance Center will stop the long-standing ungrounded claims.

This development is very desirable. However, one should not forget that the scandals around the Schneerson collection are heated not by Russian Hasidic rabbis. As noted by Vladimir Putin, as a "military organization" they significantly changed its composition in the last few years. Would their American co-religionists who have already mobilized a considerable force of the American establishment and the judiciary system be satisfied?

The Russian President concluded his speech in a rather unusual way, saying that Russia is passing the books to the Jewish community with a smile. Will they smile in response? We will know soon.