Russia to fine USA for seven books of Schneerson collection 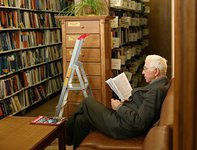 Russia's Foreign Ministry recommended that the Ministry of Culture and the Russian State Library should take a court action to levy a fine from the Library of the U.S. Congress for seven books from the Schneerson collection. Moscow delivered the books for temporary use to Washington in 1994 and has not had them returned back.

Such a move was a response to the verdict of a U.S. court from January 2013. According to the verdict, Russia is supposed to pay a fine of 50,000 dollars for each day of the storage of the Schneerson library claimed by Chabad Lubavitch, a Hasidic movement.

Alexander Samarin, Deputy Director of the Russian State Library, said that seven books of the XIX century that Washington has at its disposal were very rare. According to him, such editions are not usually passed from one library to another, and from the Russian side it was a gesture of good will. However, the books have never returned home, and U.S. authorities have repeatedly tried to exchange them for others books.

The dispute between the authorities of the Russian Federation and the United States over the Schneerson Collection has been going on for 20 years. American Hasidic community Agudas Chabad Hasidim believes that library collected by the founder of the Lubavitch Hasidic movement, Joseph Schneerson, should be transferred to their property. However, the Schneerson collection of nearly 4,500 books has never been exported from Russia and was nationalized. In 2010, the Hasidim obtained a court ruling to transfer the books in court. In case Russia was going to not to execute the ruling, Chabad threatened that it would demand the arrest of the property of the Russian Federation in the U.S..