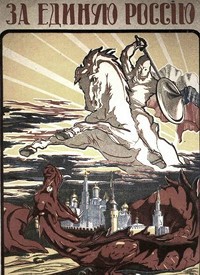 Last week President Putin and his wife formally announced their divorce. Soon thereafter, the obtuse western media reared its ugly head in tabloid form again forgetting even their own heroes of the D-Day Normandy invasion.  These perennial adolescents give their opinions as fact and disregard history or anything from the past as most drug addicts do. Again they feel free to belittle Russia as in the days of the Bolshevik revolution. With their Communist Victory Amerika it is only natural to see them ridicule, misunderstand or even hate Russia. Russia does not scornfully look at the western media but pities them. They have Obama's Soviet Mistake to deal with. Russia has already overcome their Red Dragon and is united once again much to their chagrin.

"Russians shrug at Putin divorce", wrote a confused Kathy from the Washington Post. She was not able to comprehend why we did not react to her liking. Instead she wrote all the negatives she could find from her computer. Rosenberg from the BBC wrote, "Putin divorce sparks denial and disbelief in Moscow". Sorry, we saw it coming for at least 4 years now. The Associated press wrote "Vladimir Putin pulled off one of his most audacious pieces of stagecraft" and of course reminded Americans that Stalin's wife shot herself dead. Reuters magnified the protesters again quoting, "It's time for the whole country to divorce him". Reuters, as usual, never shows the independent polls which still favor Putin. Reuters turns a blind eye to the videos of Putin supporters protesting against US paid protesters and other Communists.

It is the same old story again from the West where they find people who agree with them and report it as the majority. I believe that is how their propaganda machine works in all cases. They prefer to report Putin as having affairs with a gymnast which was originally reported by his enemies. Perhaps he did but the West focuses on it without proof. The West always ignores Russian facts like how the Christian church triumphed in Russia. They never show different ethnicities in Russia preferring to portray Russia as all white. Never revealing how the West would like to destroy Russia which it almost did in the 90's. Needless to say they did not show how well Putin has taken care of his family over the years. He still takes care of his family as he always has protecting them from harm as any good Father would. Lyudmila and Putin agreed to remain good friends.

The divorce announcement happened when we thought there might be a small chance they would remain married. We thought the divorce would have happened 4 or 5 years ago. His wife stopped going with him to church. She is not active at all like Medvedev's wife, Svetlana, who does a lot of work with the church and establishes children programs. Perhaps I am wrong and Lyudmila does work behind the scenes. However, I do not think Lyudmila was happy at all with Putin's plan to run a 3rd time as president. She wanted him home. I do not blame her. One could say his real wife is Russia and always has been. Vladimir Vladimirovich knows his duty to his country and is tireless in achieving it.

President Putin is a human dynamo. He works unbelievable hours and can even attend a midnight church liturgy and stand for 3 hours and sleep a little then go to work again fighting corruption in the worlds' largest country. He saved Russia from poverty and protected it from the economic chaos the West now has. His economic success for Russia continues by flying to other nations promoting economic growth beneficial not only to his country but others as well. He strives to ensure security in the world especially in the troubled Middle East.

Putin defends Russia from aggressive enemies on all sides. Russia's military has grown and will continue to grow even more while constantly developing new weapons. He has sacrificed much without complaint during his 38 years of working and defending Russia. Putin did say he was happy as a bachelor and he said if he had not met Lyudmila he would have never married. It is sad they are divorced now. The sorrow was heard in their voices. A great price they had to pay. Almost 95 years ago, on July 17, 1918, the last Tsar and his entire family paid the ultimate price and were murdered by the Red menace.  It unleashed Hell's fury soaking their homeland with blood. Vladimir Vladimirovich will never allow Russia to be divided and destroyed again. He has sworn to it and his actions prove it.