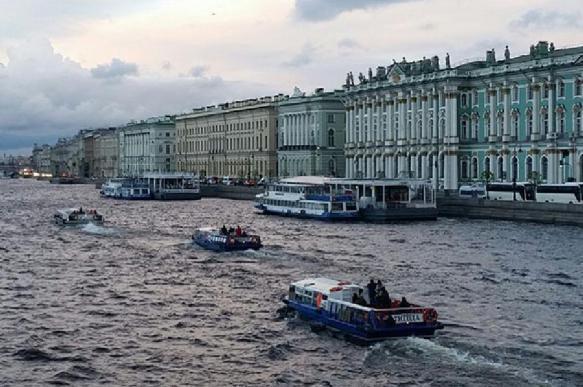 Saint Petersburg's historical centre was the first Russian site to be inscribed on the UNESCO list of Cultural World Heritage, a city of wonders, in the literal and metaphorical sense.

All tourists know the famous "White Nights" in May, June and July, when magical twilight lasts all night due to Saint Petersburg's position below the Arctic Circle. During the "White Nights," the drawbridges spanning the Neva are drawn between two and four a.m., to let ships pass up and down the river.

The Neva is a river loved by poets, a recurring theme in Alexander Pushkin's poetry. He admired the Neva in all seasons, even in harsh winters, when it is "tossing and turning like a sick man in his troubled bed." Alexander Pushkin (1799-1837) expressed his unconditional love for the city of wonders in this poem:

I love thy harmonies austere,

Along the banks of granite sheer ...

The "City of Peter's making" owes much of its architectonic singularity to Tsar Peter the Great, who had it designed with canals, bridges and palaces of western design. Alexander Pushkin pays homage to Peter the Great in his narrative poem, "The Bronze Horseman: A Petersburg Tale" (1833), evolving around the well-known equestrian statue of the Tsar.

In Nikolai Gogol's "Saint Petersburg Tales," Nevsky Prospect is described as a place of wonders, too, a street that undergoes many changes, from the bakers in the morning to the clerks who leave their offices in the evening.

Nikolai Gogol inserts fantastic elements, strange things occur in his tales. In his literary Saint Petersburg, all is not as it seems, but "the devil himself lights the lamps only so as to show everything not as it really looks." Nikolai Gogol (1809-1852) portrayed life in this city with a masterful mixture of absurdity, comedy and satire.

Saint Petersburg is beautiful not only in spring and summer, but in the darker seasons of autumn and winter as well, when cultural activities turn from outdoors to indoors, when museums and palaces, concert halls and opera houses light up their crystal chandeliers to welcome and enchant visitors from around the world.

The cultural indoors season of 2012 began with the first Saint Petersburg International Film Festival in the last week of September, presenting 14 films from Argentina, China, India, Iran and other countries. The Russian contribution was Alexei Babanov's "I also want it."

The international jury was presided over by the world-famous Serbian film director, Emir Kusturica. Russian audiences were introduced to interesting works of cinematography. Some vintage films were shown, a selection of old masterpieces from Lenfilm, Russia's oldest film studio.

In the same period, at the end of September 2012, the Saint Petersburg Philharmonic opened its 92nd season with a host of interesting concerts on its programme. It is Russia's oldest philharmonic ensemble, founded in 1882.

In 1917, this orchestra became the State Orchestra. Soloists Vladimir Horowitz and Sergei Prokofiev worked with the excellent musicians. In 1918, the orchestra performed the Classical Symphony of Prokofiev for the first time. In 1926, Shostakovich's First Symphony followed, conducted by Nikolai Malko. In 1934, the orchestra received the title "Honoured Collective of the Soviet Union."

Saint Petersburg is a musical city, presenting a myriad of musical highlights. In the first week of November 2012, the city celebrated the 22nd International Conservatory Festival. This year it was dedicated to the 150th anniversary of the Rimsky-Korsakov Saint Petersburg State Conservatory, where many prominent Russian composers studied, for example Pyotr Tchaikovsky.

The conservatory was founded in 1862. Nikolai Rimsky-Korsakov joined the faculty in 1871 and later gave the institution his name. He was a master of orchestration and developed a national style of Russian music by blending Russian folk songs and folklore with harmonic, melodic and rhythmic elements.

Nikolai Rimsky-Korsakov (1844-1908) left a large oeuvre of original Russian compositions. Some of his best-known works are the "Russian Easter Festival Overture" and the symphonic suite "Scheherezade."

Today, the Saint Petersburg Conservatory is one of the most famous music academies in the world, with about 1.500 students, 250 of whom are foreigners. They are offered lectures in academic subjects, master classes and regular opportunities for public performances.

At the end of November 2012, the International Contest of Vocalists, "The Grand Prix of Saint Petersburg," was held with 200 contestants. The Russian singer, Pyotr Zakharov, and Pavel Sklyarov from Ukraine, won the first prize. Two young opera singers of the Mariinsky Academy, Alexander Trifimov and Anna Shulgina, shared the second prize. The Mariinsky Academy of Young Singers belongs to the Mariinsky Theatre. The Academy was established in 1998. It is a post-graduate institute for young performers.

Soloists of the Academy perform regularly in the Mariinsky Theatre's productions, for example in Nikolai Rimsky-Korsakov's operas, "The Golden Cockerel," "The Tale of Tsar Saltan" and "May Night and the Snow Maiden." They also performed in the world premiere of "Gogoliade," three one-act operas by modern Russian composers, based on works of Nikolai Gogol.

Saint Petersburg is the home of extensive, priceless art collections. The Russian Museum opened a permanent exposition called "Faces of Russia" in the first week of December 2012, showing a collection of portraits. This exposition is staged at the Mikhailov Palace. The exhibition's curator, Yevgenya Petrova, said in an interview with the Voice of Russia:

"This exhibit is divided into two parts. One is dedicated to the Tsars' portraits. The second part shows people of other sectors of the Russian population, from the 18th century until modern times. It consists of 220 works, including the paintings of such well-known artists as Ivan Kramskoy, Ilya Repin and Valentin Serov."

The Russian Museum is the largest depository of art in Saint Petersburg, founded in 1895 by Tsar Nikolas II. The museum's main showcase is the splendid Mikhailov Palace, a neo-classical residence of Grand Duke Mikhail Pavlovich of Russia.

A combination of art and music was presented at the 13th Saint Petersburg Art Square Festival, on the 14th and 15th of December 2012, named after a central square of the city, where the Philharmonic Hall, the Russian Museum, the Mikhailovsky Theatre and the Music Comedy Theatre stand in a row. The festival's initiator, Russian conductor Yury Tamirkanov, explained his idea in an interview with the Voice of Russia:

The Mikhailovsky Theatre contributed the performance of the ballet "Romeo and Juliet," with music composed by Sergei Prokofiev. It is one of Russia's oldest opera and ballet houses, established in 1833 and named after the Grand Duke Mikhail Pavlovich.

Another festival was held in the middle of December, the 2nd International Arctic Film Festival. President Vladimir Putin, who was born in Saint Petersburg (in 1952: Leningrad) and studied in this city, sent his greetings to the participants. Part of the presidential message read:

"Russia pays special attention to the dynamic development of a comprehensive partnership with the countries of the Arctic region. Our key priorities include joint projects in the field of environmental protection, conservation of the unique culture of the indigenous peoples of the North, education initiatives and programmes. Your festival fully meets these important goals."

The emphasis of the 23 documentary films was on exploration, development and protection of the fragile Arctic environment. An Arctic exhibition accompanied the event. The organizing committee's president was Artur Chilingarov, a polar explorer and Russian Presidential Envoy to the Arctic.

Last, but not least, the World Congress of Russian compatriots took place in Saint Petersburg. It was not really a cultural event, but very interesting, nevertheless. About 540 delegates from 94 countries gathered at the Tauride Palace. About ten million Russians and descendents of Russians live outside of Russia.

They are very different people, according to the various countries they inhabit, but what they all have in common is their love for the homeland. These compatriots possess common roots and values, a common culture, language and spirit. Therefore, they seek regular contacts to the motherland, where their ancestors came from.

President Vladimir Putin recently formulated the idea to facilitate the return to Russia for descendants of Russians and Russian compatriots living in the Diaspora abroad. More than 100.000 Russians have already been relocated to Russia with the help of a state programme. Hopefully, more compatriots will be soon able to fulfil their dream of returning home to the Russian Federation.