The State Duma on Wednesday endorsed strong amendments to the "Law of Dima Yakovlev". In addition to the ban on adoptions of Russian children by American families that evoked strong emotions, more significant amendments were adopted, including suspension of the activities of "political" NGOs receiving funds from U.S. citizens. In addition, the deputies voted to ban Russian citizens who have citizenship of the United States to head non-profit organizations. 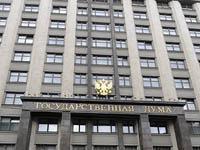 The amendment adopted in the second reading, in particular, provides that the Ministry of Justice should suspend the operations of NGOs that "participate in political activities in Russia and get free cash and other property from citizens (organizations) in the United States or implement projects, programs or other activities that threaten the interests of Russia on the Russian territory."

Members of Parliament also adopted an amendment prohibiting citizens of Russia who have U.S. citizenship from being members or leaders of non-profit organizations involved in political activities and structures. This prohibition also applies to international branches of foreign NGOs. A violation of this amendment would be punished by arrest of assets, Interfax reported. The approved version of the bill also includes a ban on entry to Russia of foreign citizens involved in imposition of sanctions against the Russians in their countries. Initially, the intention was to impose such sanctions only against Americans.

The majority of the members of parliament voted for the enhancement of the "law of Dima Yakovlev," with the exception of a few deputies. Before the vote presidential press secretary Dmitry Peskov said that "based on the known manifestations of anti-Russian attitudes, Russian President Vladimir Putin was sympathetic to the position taken by Russian lawmakers."

Meanwhile, many observers failed to see the essence behind the fights over the ban on adoptions of Russian children by U.S. citizens,. "They failed to see the forest for the trees," said the director of the Center for Political Information Alexei Mukhin. "The emotional debate about the fate of children made them miss the main point - the Russian government is building a line of defense from the influence of external elements and does it quite effectively, step by step," said the expert.

"I believe that, in fact, this voluntary or involuntary ploy has worked. People who were discussing the fate of the children foaming at the mouths did not see the main point. The authorities won this round: protests drew public attention not to its main content part, but the part that really aroused strong emotions, but in fact, is not principle for the authorities," said the analyst in an interview with Pravda.ru.

"I think that the Federation Council or the President may kill two birds with one stone by somewhat softening the amendment. On the one hand, social unrest would subside, and on the other, they would win in terms of their image," said Alexei Mukhin.

In turn, speaking of the amendments adopted today that suspend the activities of NGOs in politics funded by American grants, human rights activist Alexander Brod acknowledged that such activity was not encouraged by any country. "The political activities of NGOs funded from abroad is an intrusion into the internal affairs of a sovereign state and are unacceptable, and I think the U.S. would not be too thrilled if, for example, citizens of the Russian Federation would be present in social structures   and advise the United States on how to live," said in an interview with Pravda.Ru human rights activist Alexander Brod.

Even the international observers from the OSCE were turned away during the election in the U.S. when they were not allowed to the polls in the state of Texas, reminded the member of the Human Rights Council under the President of the Russian Federation. "So everything is clear: there is a desire to protect from invasion in political life," said Alexander Brod.

However, the human rights activist is against the introduction of any "black lists." "Who would they include in the "Magnitsky list?" It may be a purely subjective judgment," said the defender. "This is not a court judgment, so there may be a variety of interpretations whether a person violated human rights or not. Who will be the ultimate decision maker if MPs are not immune to subjectivity in these matters? ".

The emotional battles over the amendment introducing a ban on the adoption of Russian children by U.S. citizens overshadowed quite a remarkable incident indicating that the Russian authorities are really building a line of defense.

For example, last Wednesday, Rear Admiral of the U.S. Navy Jeffrey Harbison was denied entry to the Russian Federation "due to violations of human rights." Head of the Duma Committee on Foreign Affairs Alexei Pushkov said that the former director of the military prison at Guantanamo Bay, who transferred to the Pentagon, planned to visit Russia but was unable to do so. He was denied a Russian visa as was "black listed" by the Russian Foreign Ministry.

In principle, this dispels the myth that the Americans allegedly do not come to Russia. Incidentally, Mr. Harbison is said to have not only the "official interest" in Russia but also a company that invests in high-yielding Russian corporations. Apparently, the Russian Foreign Ministry, without further ado, and even before the notorious "Law of Dima Yakovlev," has been trying to somehow respond adequately to the discriminatory law passed in the U.S. These "bans" against U.S. officials - no matter whether they are Guantanamo leaders, organizers of "color revolutions" or participants of "Occupy Wall Street" rallies - could become everyday practice. This measure, in any case, would be much more effective than the ban on adoptions of Russian children by the United States citizens that, obviously, is mistakenly seen by many MPs as an "adequate response" to the "Magnitsky list".