Russia gives away its children to foreigners generously

In 2011, 970 Russian children were taken to the U.S. for adoption. The larger number of children was adopted only from China and Ethiopia. Thus, Russia is one of the leading donor countries sending its children to foreign nationals. The widespread belief that mainly disabled children abandoned by their Russian foster parents are adopted is refuted by experts. However, there is hope that things will change. Recently the website of the U.S. State Department on foreign adoptions reported that adoption of orphans from Russia is virtually frozen. However, there is no official confirmation of this yet.

In late February two kids who were adopted earlier were brought to St. Petersburg guardianship office. The reason for the return was clear right away. The foster mother did not reveal the fact that she has dual citizenship - U.S. and Russian. She adopted the children, of course, as a citizen of Russia, but was going to live with them in the U.S. It would seem there is no difference here, but in terms of the law it is significant.

Foreign adoptive parents (and since the woman resides in the United States with her husband, a citizen of this country, she had to adopt children by the rules for foreigners) can become foster parents for Russian orphans only through the mediation of specialized agencies. Also by law, the Russian citizens must take precedence. Therefore, children are given to foreign adoptions only after being rejected twice by potential Russian parents. 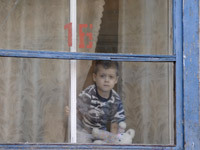 The woman would have to go through the entire process of adoption again, while paying a lot of money as a citizen of the United States. As a result, she chose to abandon the twins, who, from her point of view, probably were not worth the effort. Perhaps the changed attitude of the Russian authorities to the problem of foreign adoptions also played its role.

A few days ago the website of the government of the U.S. Department of the foreign adoption reported that the local departments of education and some courts in Russia virtually froze adoptions to the United States. In particular, there were several cases of refusal to proceed with the necessary documents. However, as the website of the department stated, no official guidance on this matter has been received and therefore they continue to work closely with the Russian authorities.

The same site provides the statistics of children adopted by Americans from other countries. The world map presented here shows that nearly all countries, except for only two or three, are "donors" sending their children to the United States. Over the past 10 years, American adoptive parents adopted 233,934 children from around the world.

Of course, the numbers vary by country. There are two world leaders - China and Russia. In the period from 1999 to 2011, 45, 112 Russian children were taken up for adoption to the United States. This is just the official statistics. If we consider the 1990s, when foreign adoptions in Russia were not controlled, this number should be doubled or even tripled.

The site of the U.S. Department of foreign adoption also provides the information of the amounts that the Americans have to pay for an orphan from another country. In China the number is $15,930 USD, in Moldova - $23,365, in Poland - $17,375 dollars. Russia is not listed. It is clear that intermediary agencies take money for their help in the adoption, and it is unlikely this amount is any lower than in other countries. Nevertheless, it is cheaper for the Americans to adopt abroad as in the U.S. this procedure is no less than 30,000 dollars.

Of course, $15-20 thousand dollars is a lot of money, and one can only be happy for a country whose citizens are willing to spread such amount for the right to become parents of a child from another country. However, it should be noted that the government stimulates this desire. For example, the adoptive parents are entitled to an interest-free loan to buy a home.

Their employers are entitled to a substantial tax credit. That is, all money spent on the adoption is offset, which means that it is profitable to be adoptive parents in the United States. This explains the fact that adoptive parents are sometimes the people who already have children of their own.

The U.S. does not experience a demographic crisis - unlike Russia. Nevertheless, the U.S. authorities are willing to financially stimulate the "import" of children from other countries, recognizing that human capital is becoming increasingly crucial for the welfare of the country. Meanwhile, Russia is taking measures to stimulate birth rate with one hand, and blesses children for export with another. Note that 970 children are only those who were taken to the U.S., the number of the total foreign adoptions from Russia to other countries is several times higher.

The most common argument in favor of the adoption by foreign citizens is that they adopt mostly sick children and the disabled, abandoned by the Russian adoptive parents. Anton Zharov, who is a lawyer for the adoption and lecturer in the School of the adoptive parents Charitable Foundation "Family", knows the situation from the inside, and has very different opinion in this respect: "The more children are in an orphanage, the higher the likelihood that some girl or boy will find a foreign adopter. Why foreign? If the adoption in Russia is just "reducing the contingent," that the adoption abroad is always an opportunity to get certain compensation ".

In order for foreign adoption to work, there has to be a sufficiently large number of children who have been in a federal data bank for over six months. For these children not be adopted by Russians, all they have to do is simply make up some scary diagnosis for the child, and better more than one. This should be accompanied by horrible ancestry - a drug addict and alcoholic mother, and even worse father.

A letter from the adoptive parents published in the blog of Anton Zharov in the online magazine "Snob" confirms this theory. In an orphanage the parents were offered a three- months-old baby declined by three couples of potential adopters. The child was a favorite of nurses and generally charming baby. "The infected children are always good," sadly pursed her lips the head doctor, scaring the potential parents with hepatitis C and other horrors. However, the couple decided to adopt anyway. Once they have made all required tests, it became clear that the child did not have hepatitis, as well as all other diagnoses. The nurses then admitted they were preparing the child for foreign adoption.

It turns out that foreigners often adopt children with severe diagnoses. Subsequently, they miraculously "recover" because of excellent parental care. According to Anton Zharov, Russian adoptive parents today are competing with foreigners for the right to take a child into the family. The most demanded age group is from zero to four years. There are not that many of these children. But foreign adoption agencies have an opportunity to turn this around.

In 2007, according to the Ministry of Education, 4,536 of children were adopted overseas, while in Russia 125,025 children were adopted for all forms of family, including guardianship and foster families. This means that a myth that the Russians do not want to adopt children is also untrue. This myth is beneficial for many interested parties - orphanages and children's homes, adoption agencies and foreign adoptive parents. It is not beneficial for Russia. But apparently, it is not considered a powerful argument for banning foreign adoptions.