CNN should be booed 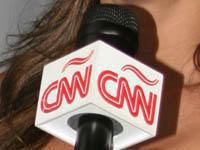 CNN has produced a sensation. The world's No. 1 news network said that Putin was booed during the congress of United Russia Party in Moscow. The people attending the congress were chanting "Putin, Medvedev, Russia!" It is simply impossible to take the chanting for booing. Nevertheless, a CNN reporter said that it was booing, not chanting.

In literal sense, the "professional" journalist took one event for another. It goes about the Emelianenko-Monson fight, which took place at Moscow's Olympic arena. Putin attended the fight and appeared on the ring to congratulate the Russian athlete. Soon afterwards, many Russian and Western news agencies reported that Putin was booed during his speech.

Here is another curious coincidence. Vladimir Putin stated the following during the above-mentioned congress: "Representatives of several foreign states gather those whom they pay - the so-called grant-takers. They instruct them and make them work "accordingly" to show influence on the course of the election campaign in our country."

It is quite possible, though, that CNN, which "loves" Russia dearly for many years, has its own vision about all this. A journalist of this company, standing against the background of St. Basil's Cathedral in Moscow, said that Russia - the country which is famous in the world for human trafficking, prostitutes and guest-workers - was celebrating the 300th anniversary of the abolition of serfdom. Anyone is free to think whatever they want about Russia, of course. However, serfdom was abolished in Russia in 1861, which means that Russia will celebrate the 300th anniversary in 2161.

When making a report about the riots on Manezhnaya Square (next to Red Square, near the Kremlin) CNN showed the footage of people with nationalist slogans and said that the residents of eastern Russia gathered for a meeting in Moscow to protest Medvedev's cancellation of time zones.

The administration of the US-based company apologized to the Iranian authorities for the mistake.

Let's get back to where we started, though. The Financial Times published an article about the congress of United Russia party and illustrated the article with a photo taken during the above-mentioned fight at the Olympic arena. It does not look like a mistake in this case, though. The FT journalists did that on purpose. But does it look like wishful thinking?