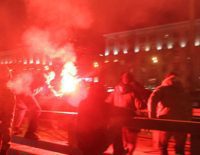 It has been nine days since massive riots in the center of Moscow. Nevertheless, the trend, which was set by ultra-right youngsters on Manezhnaya Square on December 11, is still actual. The subject of 'ethnic clashes' is being actively heated up from within. Many Russian bloggers still say that clashes between nationalists and migrants from the Caucasus will continue to occur.

On December 11, as we remember, several thousands of young people arranged an unauthorized action on Manezhnaya Square. The action developed into mass riots very quickly, although it was supposed to be held in memory of Yegor Sviridov, a fan of Spartak football club. The participants of the meeting started chanting nationalists slogans; dozens of innocent people were beaten in the riots.

The events that rocked Manezhnaya Square did not repeat again on December 15. The Moscow police prevented the riots, over 1,300 people were arrested; traumatic guns, knives, hammers and baseball bats were withdrawn from them.

The law-enforcement authorities opened nearly 20 criminal cases into mass riots in the center of Moscow. Investigators identified a group of people who took a direct part in the organization of pogroms on Manezhnaya Square. One of them - a young man, who was calling upon others to commit illegal actions, - was arrested.

Clashes between nationalists and migrants from the Caucasus were expected to repeat again on December 18 and 19. Many posts appeared on the Internet saying that the ultra-rights would gather near Ostankino TV center, whereas migrants would gather again near Kievsky Train Station, which links Moscow with Russia's southern territories, where migrants presumably come from.

Russia Today: Over 1,000 arrested in Moscow and region

As a result, on December 18, riots were expected on Manezhnaya Square, on Profsoyuznaya Street, near Vodny Stadion metro station and on VDNKh (All-Russian Exhibition Center).

The riot police were put on high alert again. Special police units appeared on all of the above-mentioned locations. Unexampled security measures were taken in St. Petersburg too. Dozens of young men - both of Slavic and non-Slavic appearance - were arrested in Moscow during the weekend.

Most of the people detained in Ostankino are underage individuals. "It's very concerning that most of the detainees are eighth or ninth-graders - they are boys and girls," Viktor Biryukov, the chief of the PR department of Moscow Police Department said.

Most of those who wanted to respond to the failed 'anti-Russian pogrom' on December 15 near Kievsky Train Station were also teenagers aged 14-15. "There are so many little boys and girls here. Did they advertise the event at schools? What are their parents thinking?" a Russian journalist blogged on December 15. Therefore, the minors make the majority of those who follow online propaganda.

Contrary to panic expectations and provocative appeals, there were no new riots in Moscow on December 18. The police arrested nearly 1,000 aggressive individuals for their attempts to conduct illegal actions in the capital.

One may assume that propaganda campaigns will continue to stir ethnic strife in the future, although such activities can only lead to sad consequences. After the riots on Manezhnaya, the number of ethnic crimes increased considerably, and it seems that the situation is going to exacerbate.