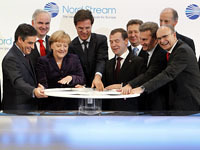 The launch of the Nord Stream pipeline, which took place with the participation of world leaders, including Russia's Medvedev and Germany's Merkel, became one of the most talked-about subjects in the Western media. Foreign publications reluctantly admit that Nord Stream has become an important victory of the Russian Federation. At the same time, they do their best to underestimate the significance of this victory.

Germany's Handelsblatt gave the most considered opinion. The construction of the new pipeline on the Baltic Sea found a balance between ecology and economy, the newspaper wrote. In several years, millions of income from Nord Stream will be used for environmental purposes.

Another German publication, Der Spiegel, doubts that the launch of the new pipeline should be considered successful. "Is it an economic achievement?" the magazine wonders. "Some still doubt that Germany may increase its dependence on the Russian gas, but the market experiences fundamental transformations, which may eventually force Russia to cut its gas appetites," the magazine wrote.

According to Der Spiegel, natural gas becomes a real commodity, the price on which will be prone to serious fluctuations. "The Russian government finances a considerable part of its budget owing to the income from the oil and gas business, which cannot but raise concerns," the German magazine said.

USA's The Wall Street Journal urged Russia's Gazprom not not rejoice too much over the launch of the pipeline. Europe is concerned about its growing dependence on the Russian fuel, so it tries to put pressure on the gas monopoly.

"The new pipeline will carry Russian natural gas to directly to European markets under the Baltic Sea, bypassing transit states such as Ukraine and Belarus and effectively eliminating the threat of major gas flow disruptions seen twice in recent years. But officials in Brussels and other European capitals can't hide their worry about high dependence on the Russian gas giant. OAO Gazprom already supplies around a quarter of Europe's gas needs," the publication said.

Another American newspaper, The Christian Science Monitor, called upon Europe not to be afraid of Russia.

"Since the collapse of the Soviet Union, Russian foreign policy has lost its past missions to spread civilization and ideology, and today mainly consists of managing the country's resource flows...Nord Stream isn't a symbol of Gazprom's might. It's a symbol of an archaic, energy-driven foreign policy that is unsustainable and counterproductive," the author of the article in The Christian Science Monitor concluded.

Britain's The Financial Times also believes that Russia does not have any reasons for euphoria. The newspaper unwillingly admits Russia's success, though.

"Gazprom has to contend with an economic slowdown that has hit gas demand in western Europe and the prospect of shale gas emerging as a key alternative source of supply. So not everything is going Russia's way. But by completing a pipeline that opponents tried to block it has strengthened its position in Europe - albeit at some cost," the newspaper said.

"Gazprom cannot get rid of the reputation of the combat wing of the Russian authorities. Gazprom's top managers do not shine with diplomacy. In the big gas game, they do not hesitate to use the Asian card against Europe. Now, when there is a question about the development of new fields and the construction of pipelines and LNG plants, they publicly warn Europe," the newspaper said.

"When Angela Merkel and Dmitry Medvedev launched the Nord Stream pipeline that will supply gas directly from Russia to Germany on the bottom of the Baltic Sea for 50 years, they tightened another nut on the geostrategic map of Europe. Thus, Europe's primary economic power falls under the energy dependence on Russia, and this dependence will inevitably affect its relations with this country," the newspaper said.

Poland took the launch of Nord Stream close to heart, because the pipe bypasses Poland and the Polish waters. Nasz Dziennik wrote that Germany had taught Poland a lesson of politics.

"Nord Stream proves the political naivety of Donald Tusk and Radoslaw Sikorski (Polish Foreign Minister). They bluntly believed the Germans, who said that the investment would not threaten Polish ports. The Germans were saying one thing and doing another. They were doing the things that they had planned, the things that were were good for them, but not for Poland. They taught us a lesson of real politics," the publication said.

One of the branches of the Nord Stream pipeline will go from Germany to the Czech Republic and Slovakia. These countries will now be protected against the scandals in Ukraine. Nevertheless, the Czech newspaper Lidove Noviny believes that there is no point for the country to take part in the project.

"One can find strange bridges today that lead to nowhere. The Czech leg of the Nord Stream pipeline, on which gas will flow from the north of Germany to Bavaria is one of them."

Everyone uses the weapon that they have. Some build army bases all over the world, others have banks, some others have factories, some use their cheap labor force. Russia has gas, and it tries to gain as much profit from it as possible. For some reason, there are people who say that Russia does not have a right for it.