Dmitry Medvedev will attend the ceremony to celebrate the beginning of the construction of the Nord Stream pipeline in the city of Vybord. Officials representing other countries in the project will take part in the event too. 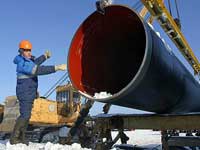 The actual laying of pipes began on April 6. Nord Stream AG, the operator of the project, earlier said that it had received a EUR 3.9-billion loan for the first stage of construction works. The loan for the second stage of the construction – EUR 2.5 billion – is to be obtained until the end of the year.

The first line of the pipeline is to be launched next year. Paul Corcoran, the financial director of Nord Stream AG, said that the investments in the project will total EUR 7.4 billion.

The idea to build the Nord Stream gas pipeline appeared in 2005. The pipeline will be laid along the bottom of the Baltic Sea from Russia’s Vyborg to Germany’s Greifswald. The natural gas for the new system will be supplied from the South-Russian deposit in Russia’s major gas region.

The length of the sea part of the pipeline will be 1,189 kilometers. It will embrace economic zones of several states – Russia, Finland, Sweden, Denmark and Germany. The fuel will then be transported on the ground surface via Germany and Holland. A shorter part of the system will be built on the floor of the North Sea to reach Great Britain.

The organizers of the project were forced to change the route of the pipeline in the territorial waters of Germany. The decision was made following the request from the German military who said that they frequently conduct drills in the area.

Another objection came from Polish entrepreneurs. They said that the pipeline would impede the navigation near the border with Germany.

The Nord Stream was the subject of several political scandals. It is an open secret that the project had a certain political significance. One of the goals is to provide stable deliveries of the Russian gas to Europe and decrease Russia’s dependence on transit countries, such as Ukraine, Poland and the Baltic States.

As soon as the project emerged on paper, the Polish government objected. Poland’s President Lech Kaczynski and Prime Minister Donald Tusk compared the pipeline with a new Molotov-Ribbentrop Pact. The leaders of Latvia, Lithuania and Estonia urged to bury the idea of the project not to let Europe become more dependent on the Russian gas.

The position of such countries as Finland, Sweden and Denmark was more important, though. They could not give their agreement to the project for several years. The governments of these countries had to take account of local ecological organizations who claimed that the pipes could seriously damage the area of the Baltic Sea.

The situation changed for the better last autumn when the operating company presented a conclusion saying that the construction of the project would not harm ecology.