A brigade equipped with Iskander mobile ballistic missile systems has appeared in the Russian army. The systems were deployed in the Western military district of Russia, and there were obvious reasons for that. 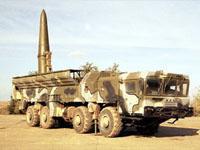 According Colonel Andrei Bobrun, the chairman of the press service of the Western military district, Iskander systems will gradually replace Tochka missile complexes that were passed into service during the 1970s.

"Iskander outstrips the predecessor on all indices such as the shooting accuracy and the range of fire, the weight, the ammunition state, the speed of movement and others," Interfax quoted the official as saying.

The Izvestia newspaper previously said that the missile brigade armed with Iskander systems was deployed in the town of Luga, the Leningrad region (St. Petersburg). The rearmament process was very slow, but it was eventually finished. It is not clear, though, how long it will take the Russian military to rearm the armed forces entirely.

Experts have certain doubts about the need in Iskander systems. First off, its missiles will not be able to reach US interceptor missiles in Romania and the radar station in Turkey. That maximum range of the complex is 500 kilometers.

Secondly, the air defense system does not pose a large threat to Russia because it will be unable to stop attacks in case of a conflict anyway. Thirdly, Russia does not need to arm itself with Iskanders - the country needs to develop strategic partnership with NATO, experts say.

To develop this cooperation, the wish of both Russia and the alliance is required. A single-handed movement in this direction may lead to events, which we had in Russia during the 1990s.

It is an open secret that the United States refuses to give any legal guarantees saying that the air defense system will not be targeted against Russia. Officials in Washington and Brussels urge Russia to confine itself to verbal statements. We have already done that before, when NATO promised not to expand to the East. Therefore, the strategic partnership with NATO is an important thing, of course, but one should not develop too much fondness for it.

One may recollect a story that took place in 2008. The USA showed its unwillingness to assume obligations as far as the air defense system was concerned. In response, Russia's Medvedev ordered to start preparations for deploying Iskander missile systems in the Kaliningrad enclave.

Medvedev canceled the decision a year later. USA's new president Barack Obama revised the plans about the deployment of interceptor missiles in Poland and the radar station in the Czech Republic.

Obama only revised those plans, but he did not refuse from them. Now one may say that the question with the radar and the missiles in Turkey, Romania and Poland has been settled. Moscow may therefore return to the question of Iskanders in the Kaliningrad enclave.