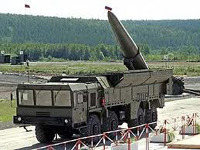 Tactical missile Iskander was adopted by the Western Military District (ZVO), announced the commander of ZVO Arkady Bahin. He did not specify exactly how many complexes were received in the armament, but noted that "re-staging and adaptation of new equipment is under way."

Russian President Dmitry Medvedev announced the upcoming introduction of Iskander into the armed forces in November of 2009. According to him, in 2010 the Russian armed forces would receive five Iskander units. In addition, Iskander units should appear in all military districts.

It is worth mentioning that in NATO countries the news about the possibility of deploying Iskander missile has caused a very nervous reaction. As Victor Litovkin, managing editor of the newspaper Independent Military Review, stated in an interview with Pravda.ru "the concerns of NATO officials are understandable. The missile can be equipped not only with a conventional but also a nuclear warhead. The range of tactical Iskander-M is 500 kilometers, and many military objects of the alliance will be threatened.

If we place Iskander missiles in the Kola Peninsula, they would cover a significant part of the Scandinavian Peninsula, including a large area of Norway.

If they appear in Belarus, then the majority of Polish territory is under attack. However, we should make a reservation that, under existing international agreements, we cannot place our nuclear forces on the territory of third countries. In this case we can speak only of Iskander missiles equipped with conventional warheads.

Of course, deployment of Iskander units in Belarus will require signing a new military agreement on creation of additional Russian military base in this country. Yet, theoretically, this option may become a reality. It is not ruled out that Iskander, by mutual agreement, may appear in the service of the Belarusian army. However, in this case, we can supply Minsk only the export version of the Iskander-E with a radius of 280 kilometers.

We need Iskander in the Western Military District only because NATO military bases already exist at our borders. Take, for example, the air base in Lithuania's Siauliai, where armored F-16 are constantly on duty. They are capable of carrying nuclear bombs, dozens of which are now stored at six military bases of NATO in Europe.

If the F-16 take off from the base in Siauliai, they can strike at our bases of nuclear deterrence in Bologoye, Kozielsk etc., within 15-25 minutes to

Add to this the recent decision by Poland to host a U.S. air base, which also may be equipped with F-16, capable of carrying nuclear weapons. The fact that we have Iskander units allows minimizing this threat to some extent.

What is good about this missile system? First of all, it is very precise. Because of this it can effectively defeat any enemy targets, including command centers, control centers, aircraft, air defense sites, databases, storage of equipment and fuel, positions of troops, including artillery, etc.

In addition, it is convenient for transportation, including by plane, and can travel practically anywhere. Its missile can maneuver, which at high speed makes it impossible to intercept. Moreover, it is impossible to detect it by radars available today.

It should be noticed that NATO members cannot file a claim because this complex does not violate Intermediate and Small Range Nuclear Forces Treaty signed by Russia and the United States. According to its terms, the parties cannot be armed with the missiles with ranges over 500 kilometers."

However, earlier NATO experts expressed their concerns about the fact that Russia actually has violated the Treaty, since the alleged modification of the Iskander-K allows firing cruise missiles P-500, capable of striking targets at a distance of 2000 kilometers.

However, so far no one can prove that the cruise missiles fall under the scope of this contract. The responsibility for the "arms race" in the region is entirely and solely on NATO. Namely, the United States and Poland that last week agreed to host new U.S. military base in Łask near the border with Russia.