Japan wins hearts and minds of Russians on Kuril Islands 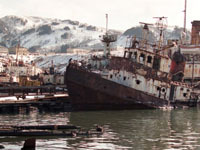 October 19 marked 55 years since the USSR and Japan signed the joint declaration which helped the two countries restore their diplomatic ties. The document also became the springboard for Japan to demand the return of South Kuril Islands. Japan uses Russia's blunders to get closer to its goal. The country also tries to win the hearts and minds of the residents of the disputed islands.

Japanese officials claim that two South Kuril islands of Shikotan and Habomai should have been returned under Japan's jurisdiction in accordance with the declaration from 1956. Japan did not receive the two islands because Tokyo was intended to sign the peace treaty with a pledge to return two other islands of the Kuril ridge - Kunashir and Iturup.

The USSR did not accept such conditions. Nowadays, Japan persistently claims the ownership of South Kuril islands. The residents of the Land of the Rising Sun periodically conduct provocative actions in the region. Their US allies add more fuel to the fire. For example, officials of the US State Department said that South Kurils were a part of the Japanese territory.

In addition to provocative statements and actions in the area of South Kurils, the Japanese increase the power of their "Self-Defense Forces." The nation particularly strengthen their navy, which is very powerful already.

Needless to say that Russia is very concerned about the development of the situation with its islands. In the beginning of October, Russian officials announced a large-scale rearmament program for its troops in South Kurils. T-55 and IS tanks will be replaced with T-80 battle tanks in the near future. The air defense system of the islands is to be strengthened too.

It goes without saying that the defense aspect of the Kuril issue is extremely important. One should bear in mind the fact that there are other spheres, in which Russia does not act as a winner yet. It goes about the fight for the hearts and minds of the residents of the islands.

The news about the shipments of T-80 tanks comes as a surprise to local citizens. The people say that the Russian government should at first take care of the needs of the local population. It would be an exaggeration to say that the Russian authorities do nothing for the Kurils. It seemed that the residents of the islands were forgotten after the USSR collapsed. The underdeveloped infrastructure of the islands continued to decline.

In pictures: Disputed Kuril Islands as seen through bird's eye

The main problem for the local citizens is the transport communication with the mainland. There was certain progress reached in this direction within the scope of the Federal program to develop the Kuril Islands. They reconstruct the airdrome on Kunashir and build a new airport on Iturup. However, the locals say that the slow speed of construction may delay the launch of the objects.

Local residents complain of the low capacity of local ports and airdromes. In addition, high prices on plane tickets is a serious obstacle for many locals to travel to other regions of Russia. However, many Kuril residents regularly travel to Japan. The latter does everything possible to demonstrate their favor, hospitality and tolerance to the Russian culture.

In Japan, Russian tourists from the Kurils are invited to visit museums, where guides would explain the fairness of Tokyo's claims for the islands. Japan has different tourist programs for different categories of tourists from the Kurils. They have special programs for young people, for medical specialists, for scientists and ecologists, etc. As a result, the Japanese show all advantages of their country to the Russians. Furthermore, many of those who visit Japan, come to realize that they are treated there a lot better.

Many Russian women from the Kuril islands eventually prefer to seek better lives in the Land of the Rising Sun. Many young Russians living on the Kurils are very interested in the Japanese culture and language. They receive attractive offers to study and work in Japan.

This is how Japan fights for the hearts and minds of the Kuril residents, and Russia obviously loses at this point. The majority of them already see the Japanese as their friends.