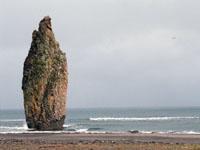 Russian troops on the Kuril Islands received anti-aircraft missile systems "Buk-M1", a battalion of tanks T-80 and modern means of communication. Earlier the Russian Defense Ministry said that within a few years it was planned to create a powerful defensive complex on the Kuril Islands.

Until recently, the 18th machine-gun and artillery division stationed on the islands obviously could not be called the most modern in the Russian army. This means that the re-grouping of the Russian troops in the Kuril Islands was planned. The problem was the implementation of these plans.

The southern neighbors helped to expedite the process. Tokyo's hysteria with regard to the visit of the Russian President to the Kuril Islands at the end of last year has shown Moscow that the region must have more convincing arguments than IP tanks dug into the ground. The certainty was then backed up by Washington whose State Department stated that the U.S. believed the Southern Kuriles to be Japanese territory.

In May of this year, the plan of the Ministry of Defense to rearm the military units located in the Kuril Islands was approved. According to Chief of General Staff of the Armed Forces, Army General Nikolai Makarov, the plan is to be implemented within four to five years.

Under this plan, two military bases will be built. The troops stationed in the Kuriles began to receive air defense systems "Buk-M1" and T-80 tanks, and had already obsolete T-55M replaced. Renovation and expansion of the existing airport on the island has been started.

In addition, Nikolai Makarov said earlier that the Russian troops serving in the Kuril Islands will also be supplied with mobile coastal missile systems "Bastion" with "Yakhont" missiles. According to some experts, this is the most valuable part of the rearmament program.

In the longer term "Buk-M2" systems will be replaced, and the troops in the Kuriles will be strengthened by "Armour-C1", anti-aircraft missile systems S-400 "Triumph" and "Tor-M2", and attack helicopters Mi-28N "Night Hunter". There has not been final decision on locating these very complexes on the Kuriles.