Russia says no to Kalashnikovs 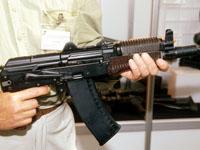 This year has seen the end of the longstanding tradition of the Soviet times. Russia's Defense Ministry has decided to completely refuse from purchasing the legendary AK-74 rifles for the army. There are two reasons for that: the country has too many Kalashnikovs and they are outdated.

Nikolai Makarov, the Chief of the General Staff of the Russian Armed Forces said: "Yes, we have refused. The reserves that we have in the country exceed the needs considerably."

Afterwards, the official destroyed the AK-74 completely having said that the Kalashnikovs were not good for the army.

The Chief of the General Staff is an important person, of course. He obviously knows all about the reserves and the needs. However, it is not clear which logic the official had in mind. Was it peace-time or war-time logic? However, the point here is not the quantity. It is about the quality of Kalashnikov assault rifles. If they do not conform with today's standards of small arms, it just so happens that Russian military depots are piled with garbage that no one needs. What will the soldiers get in return?

The Kalashnikov AK-47 (7.62 mm caliber) was developed by Mikhail Kalashnikov in 1947. The rifle was passed into service in 1949. The basic model of the rifle was then used as the basis to create a whole family of combat and civil weapons of various calibers. They include AKM and AK-74 rifles, RPK guns, carabines, smooth-bore Saiga guns, etc.

One may not say that the legendary Kalashnikov is a flawless weapon even though the AK is ranked first in the world in its class. The Kalashnikov rifle, or Kalash, as it is commonly referred to in Russia, has become the benchmark of quality, reliability and simplicity. The weapon has always been criticized for its precision fire inefficiency. As for other flaws, specialists indicated difficulties in mounting state-of-the-art optical systems. The list continues with excessive weight of the rifle and the absence of modularity - the possibility to use quick change barrels - and several other "little things."

Any device has its own drawbacks, but those drawbacks pale in comparison with advantages. However, the Russian Defense Ministry does not even want to hear anything about the modernization of the iconic weapon. They want a new assault rifle instead. Moreover, defense officials do their best to conceal their anti-AK-47 plans from the designer of the weapon, Mikhail Kalashnikov.

Well, we only can say that bow and arrows used to be considered the world's best weapons that man has ever created. If you say no to modernization in the army, it only means that you want this army to be destroyed. At the same time, a quick rearmament is like disarmament. One should create something new before getting rid of something old.

Also read: Russia to have foreign army and US ballistic missiles?

There is also another variant. "Russian armed forces do not exclude an opportunity to purchase military hardware from abroad," the chief of the general staff used to say. Mr. Makarov hailed French armored vehicles and Caesar howitzers. That is not it, though. Dragunov's sniper rifles depart this life as well. They will be replaced with Western rifles. Moreover, Russia intends to purchase Israeli unmanned aircraft and French helicopter carriers Mistral. That appears to be a trend! According to Russian defense officials, it is much easier to buy than to make.

When President Medvedev asked the Defense Ministry to explain the failure of the state defense order for 2011, officials said that the prices on defense industry products had skyrocketed. It appears that the ministry simply wanted to save some money so they preferred not to sign any deals with domestic defense enterprises in the sum of over 100 billion rubles. As a result, the Russian army has not received strategic missiles and many other things. It seems that Russia has too many strategic missiles too.