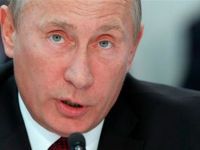 Russian Prime Minister, Vladimir Putin, made his candidacy official for presidential elections next March, during a congress of the ruling party, in which it also was announced that current president, Dmitry Medvedev, will be his running mate as a candidate for the head of government.

Medvedev heads the list of United Russia in parliament while Putin pledged to increase the minimum wage of workers and to modernize the economy.

The announcement was cheered by about 11 thousand members of United Russia and supported by the Congress. The majority of seats are occupied by the said political movement.

The Head of State said that "I think it would be good for Congress to support the candidacy of the party chief, Vladimir Putin, for the post of president of the country." This responsibility "is a great honor for me," said Putin, who served two consecutive terms between 2000 and 2008, but could not run for a third consecutive term.

The change for the current Russian president would be for him to lead the party list for parliamentary elections next December and be Prime Minister after the presidential elections in 2012, predicted Putin, after stating that "United Russia will win the legislative contest and, based on this support, Dimitri Anatolevich (Medvedev) may create a new team, young, energetic and effective and run the government of Russia."

"I am prepared to lead this government and work for the good of the country," Medvedev said.

Putin would have clarified earlier that for the tandem it has "long been clear who would do what after the elections."

"I want to say clearly that a long time ago, we had achieved an agreement on what to do and what to dedicate ourselves to in the future," he added.

In 2008, the Congress passed a law extending the presidential term from four to six years, which means that Putin, after being victorious in the election, may run again in 2018 and remain in power until 2024.

On the other hand, critics believe that this announcement raises for Russia, "a doomsday scenario."

This was stated by former Deputy Prime Minister, Boris Nemtsov, who was head of government during the mandate of Boris Yeltsin (1991-1999), while the Communist Party chief, Gennady Zyuganov, the only representative of the opposition in Congress, said "There is nothing new here for us (...) this agreement was decided before, this was just to formalize it."