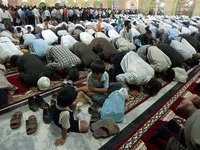 Uraza Bayram (Eid ul-Fitr), a Muslim holiday that marks the end of Ramadan, turned the Russian capital into "Moscowbad" again. The holiday showed that the vast influx of Muslim believers creates one and the same problems year in and out.

Some say that Moscow needs more mosques to have the problem solved. However, as experience shows, Moscow-based Muslims do not want to visit new places for mass prayers. There are four mosques in the city, but tens of thousands of Muslims come to the Cathedral Mosque in the center of Moscow, near the Olympic Sports Complex. Crowds of Islam followers inundate the streets in the area, create traffic jams, besiege the Moscow subway and bother Muscovites, who rush for work.

As many as 50,000 Muslims came to the Cathedral Mosque on August 30 for prayers. Only 15,000 came to the mosque on Bolshaya Tatarskaya Street (Novokuznetskaya metro station).

Moscow mayor Sergei Sobyanin ordered to arrange the prayer house at one of the pavilions of the exhibition center in Sokolniki Park. Moscow authorities were expecting up to 9,000 believers to come to the pavilion. However, the turnout was much lower than expected. The huge pavilion, with countless prayer rugs on the floor, was half-empty, the Komsomolskaya Pravda newspaper wrote.

Muslim clergymen say that four mosques in Moscow are not enough. According to them, if new mosques were built in the city, the believers would go to different locations instead of coming to only one or two. In addition, the number of immigrants from Muslim republics of Russia and the former USSR is only expected to grow in the future.

The exact number of Muslims in Moscow is not known. In September 2009, Ravil Gainutdin, the chairman of Russia's Council of Muftis, said that there were up to 2 million Muslims living in Moscow. According to other sources, the number is a lot larger - up to 5 million. The difference is explained with the fact that many Muslims come to Moscow for earnings as illegal guest workers, the Moskovsky Komsomolets newspaper wrote.

Moscow may need new mosques with vast open-air squares around them, which the believers would use for mass prayers. It is quite possible that the construction of new mosques will solve the problem, and no one will have any problems either in the streets or in the metro.

We have to remind here that the Moscow authorities have been discussing this idea for several years already. As soon as officials try to designate a location for the construction of a new mosque, local residents begin to express their protests.

The question thus remains open, and Moscow already needs to get ready for another Muslim holiday - Qurban Bairami - the holiday of sacrifice. For many Muscovites, this holiday is best remembered for public slaughter of animals in the parks and yards of the city.

As we mentioned above, as many as 50,000 believers came to the Cathedral Mosque for mass prayers to commemorate Uraza Bayram on August 30. The mosque is located near Prospekt Mira (Peace Avenue) metro station. Many believers arranged a market near Olympic Plaza trade center. The people were selling religious goods, such as head kerchiefs, skullcaps and prayer rugs made of pieces of wallpaper. The market created a serious obstacle for many people who work and live in the area.

The believers filled the sidewalks of the avenue and inundated all streets nearby. Many of them parked their cars in two, three and even four rows. A huge traffic jam appeared.

The prayers ended at 10:00 a.m., and thousands of people headed back to the metro. A human stampede was formed near the entrance to the station. Police officers were trying to ask the believers to walk towards two other stations nearby. Another stampede appeared at 10:30 near Rizhskaya metro station. The people were storming the entrance to the station. Muscovites were hugging the walls, children were crying. Hundreds of people were late for work.