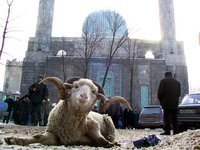 On November 16, according to the European calendar, Muslims around the world celebrate one of the major festivals of the year - Eid al-Adha festival. This celebration is the culmination of the hajj in Mecca. On the eve of this holiday the pilgrims ascend Mount Arafat, where they pray before sunset, and on the day of sacrifice they do a symbolic beating of Satan with stones.

Trucks with sheep to be slaughtered on November 16, the first day of the Muslim holiday Kurban Bayrami (in Arabic Eid al-Adha), are already located near Kazan mosques. This Feast of Sacrifice is celebrated seventy days after Ramadan in memory of the deed of the Prophet Ibrahim. According to the Quran, the archangel Jebrail, having appeared in Ibrahim's dream, gave him a commandment of Allah who wanted to strengthen the faith through a sacrifice of his firstborn Ishmael. The prophet obeyed, but at the last moment, when he drew a knife over his son, the baby was replaced with a lamb. "Since then, giving a tribute to the heroic deed of Prophet Ibrahim, and the highest degree of righteousness and love of Allah, as a rite of worship to the Lord Muslims slaughter sacrificial animals," Muslims explain. "When the ritual slaughter of Kurban (sacrifice) is performed, the heart of the believer exudes the greatest oath - to be obedient to the One Creator."

"A favorite thing for a man of Allah on the day of sacrifice is making a sacrifice," gave the words of the prophet Muhammad his beloved wife Aisha. "On the Day of Judgment the sacrificial animal will be in a bowl of good deeds with its horns, wool and hooves. The blood shed on this day reaches its place before God before it reaches the ground. This way your soul is cleaned." Kurban is killed with a prayer, with its head facing the Mecca. It is believed that every drop of Muslim blood sacrifice bids farewell to sin. On the first day of Kurban Bayrami (the feast lasts three days), participants of the hajj perform the ritual of beating Satan with stones, and after that they walk around the Kaaba. All mosques conduct festive sermons.

In addition to ram (sheep), other sacrificial animals include goats, cows, buffalos or camel. Due to the lack of camel, in Kazan Muslims usually slaughter cows and sheep (an average sheep, as well as one sixth of the bovine carcass, goes for 4.5 thousand rubles ($150)). Cows and other large animals can be sacrificed by a group of Muslims up to seven people, while a sheep is slaughtered for one Muslim or a family. The animal must be healthy and beautiful (the Prophet Mohammed called it unfit to sacrifice blind, sick, lame and thin animals), a ram should be at least one year old, a cow - two years old, a camel - five years old. One-third of the sacrificial animal is eaten by the donor himself and his family, one third is given to neighbors and relatives, and the rest is given to the poor. A festive table must display special meat dishes. Friends, relatives and children exchange presents, visit family and friends.

Mass slaughter of animals directly in front of Muslim mosques annoys the non-Muslim public worried about sheep and fearing that the sight of death will adversely affect the psyche of their children. This attitude is especially strong in traditionally non-Islamic regions, in particular, Moscow, where in 2006 a ban on public sacrifice of animals was introduced (every mosque is allowed to sacrifice only one animal). Activists of the Centre for Protection of Animal Rights "Vita" have repeatedly opposed the "cruelty towards animals during the celebration of Kurban Bayrami, meticulously counting slaughtered sheep in front of various mosques.

Some Russian republics that have large Muslim population - Tatarstan, Bashkortostan, Adygeya, Chechnya, Ingushetia, Kabardino-Balkaria, Karachay-Cherkessia and Dagestan - declared Eid al-Fitr a non-working holiday for citizens of any religion. This year the Spiritual Administration of Muslims of the Nizhny Novgorod region appealed to the government officials and heads of commercial and educational establishments asking for the release of Muslim believers from work or school on this holiday. According to a source, in areas with high concentrations of Muslims in the south of the region, employers allow the believers to leave for a prayer. Given that the Eid al-Adha compares in importance with Christmas for the Muslims, the respect towards their religious sentiments will only serve to strengthen tolerance in the Russian society.