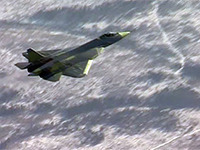 Russia is capable of exporting over 600 units of the fifth generation fighter Sukhoi. According to experts of the Center for Analysis of the Global Arms Trade, it is planned to build at least a thousand of these aircraft. The expected order of the Russian Air Force during the years of 2020-2040 with a favorable economic scenario in the country may reach 400-450 units.

In general, the volume of potential export orders for the PAK FA, considering India, could reach 548-686 fighters. Currently, the only foreign member of the PAK FA program is India, which plans to have no less than 250 units of fifth-generation fighter in service of its air force. They will be built on the basis of the Russian PAK FA, but the level of licensing control of the Russian side for the future model of the fifth generation aircraft is unknown.

In July of 2010, General Director of Sukhoi Mikhail Pogosyan said that the contract with India may be signed before the end of this year. The details of future cooperation of Sukhoi and the leading Indian corporation Hindustan Aeronautics (HAL) participating in the development have not been reported.

The real competitor to the PAK FA in the foreseeable future is only the F-35 Lightning-2, as a heavy version of the U.S. fifth generation fighter F-22. Due to its excessive price (approximately $250 million per aircraft for export) there is hardly the demand in the world arms market.

In addition, in the first half of the twenty-first century, a number of countries faced growing competition from the U.S. They want to save the independence in policy and will have to seek cooperation partners in the production of high-tech weapons systems, analysts say.

In the future, a number of Western European countries and, above all, France and possibly Germany, will show the practical interest in the partnership with Russia to develop fifth generation fighter. They will not be able to implement similar program independently, from scratch. They will not want to buy the F-35, as is done now by other countries, because they do not want to get into the technological, and as a consequence, political dependence on the U.S.

The fifth-generation aircraft is planned to take part in the aerospace show MAKS-2011. General Director of Sukhoi said that the aircraft had carried out 16 test flights, and to date the extent of its systems in terms of reliability and security allows for the program of flight tests in full. During the years 2011-12 it is planned to complete testing of the new fighter.

First Deputy Defense Minister Vladimir Popovkin estimated the need for Air Force fighter of the fifth generation at 50-100 units. By the way, Russia's own needs in the new generation of the equipment, given the size of the country, are estimated as very modest. In 2013-2015 the Ministry of Defense will buy the installation batch of ten aircrafts, and by 2020 a serial batch of 60 units will be purchased for the Air Force.

According to the Stockholm Peace Research Institute (SIPRI), Russia ranked second worldwide in terms of weapons exported. On the world market, Russia's share is 23%, while the USA has 30%. In 2001-2005, Russia has been a leader in supplying arms overseas - 31% vs. 30% of the U.S. Russia spends four times less than Japan, Germany and three times less than the Czech Republic on research and experimental development.