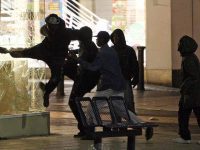 The pogroms in Britain have proved it again that the European ideology of multiculturalism has gone down in flames. This problem is not a threat to Russia at all, but we can also come to certain conclusions after what happened in England.

The things that have been happening recently in British cities, are referred to as youth riots in the media. Let's call a spade a spade, though. The pogroms in Britain were indeed arranged by young people. However, it is enough to look close at the footage of TV reports to see that it is not just young people that went on rampage in British cities. The rioters are non-white young people. They represent the non-native part of the British population. Hundreds of young yobs from the outskirts do not set out any political or social requirements. They simply loot shops and cafes.

This is not a form of protest. This is just a rebellion. It turns out that the British riots, just like the Russian ones, are pointless and brutal. In 2005, the world could see the same in the streets of Paris.

There must be some reasons for such massive public disorders. Hundreds of people do not smash shops and torch buildings out of the blue. It turns out that they do and they do not need any visible reasons for that.

Any references to the social motive in the British events are groundless. Unlike Germany and Sweden, Britain can not be called a socialist country. Britain is all about pure capitalism. Nevertheless, social guarantees in Britain are rather strong. One would not say that poor people live in clover there, but no one will let them die from hunger - that's for sure. The fact that the rioters do not set forth any social requirements confirms that the riots are not based on social reasons.

What is the reason then? The killing of a non-native British young man in London was the flashpoint, but not the reason.

The reason is about the crisis of the so-called multiculturalism - the ideology that propagates peaceful co-existence of the people of different mindsets. To put it in a nutshell, the point of the ideology is as follows. You live in our country, you pay taxes and obey the laws, but as for the rest, you can do the things that you are used to doing. You can wear a burqa on your passport photo, you can call people to prayers through loudspeakers on minarets at 5 a.m., ask butchers not to sell pork in their meat shops because the sight of pork insults your religious feelings, etc.

All of the above-mentioned examples are absolutely real. As a result, the "new Europeans" continue to live the way they lived in their native lands. The native people, who want to live in England an France, rather than in Pakistani England or Algerian France, have to move to "white neighborhoods." Several towns in Britain are already populated by Pakistani nationals only. If you find yourself in such a town, you will not believe that you are staying in the good old England.

It goes without saying that the native Britons may not have good feelings about all that. Immigrants respond with similar sentiments, and violence sparks. The pogroms are pointless because they do not have any objective. At the same time, they are strong and violent because they are based on the perceived or unperceived sense of inferiority.

The crisis of multiculturalism exists in practically all European countries. German Chancellor Angela Merkel, for example, made a public statement in which she acknowledged that this problem was very serious in Germany too. Nicolas Sarkozy came to power in France because he promised the French to deal with the problem of immigration seriously.

Nationalist sentiments in the tolerant Europe have been rising steadily during the recent years. The blood-chilling terrorist attacks in Norway is a very bright example to prove it.

One may not doubt about the fact that the Europeans will be strong enough to solve their problems themselves. For us, it is more important to realize whether such things can happen in Russia. One can be absolutely certain to say: it is impossible. The reason why is simple: just like in the USA, multiculturalism has never existed in Russia.

Russia has a completely different ideology that has nothing to do with multiculturalism. The Russian ideology is like a melting pot, which creates one single nation that shares more or less common mindset. Russia has problems with natives of the Caucasus just like America has problems with black individuals. However, the category "Russian citizen" is much more relevant than categories "Russian", "Tatar" or "Yakut". The mindset of Russians, Tatars, Yakuts, Udmurts, and the majority of other peoples of Russia has become Russian during hundreds of years of co-existence. This is a huge advantage of Russia as a huge country. Those people who call themselves patriots and chant slogans "Russia for Russians" look ridiculous. There is nothing more non-patriotic than this slogan. If Russia follows this slogan, the country will collapse.

It is worthy of note that the mindset of Uzbeks or Tajiks is of course different than the Russian mindset. However, it is based on the same grounds anyway, thanks to the Soviet Union.

In Russia, no one hurries to grant Russian citizenship to the guests from former Soviet republics. This is another aspect that differs Russia from Europe, where the white population is already the minority in many cities. This detail excludes Uzbek or Tajik riots in Russia: they realize that they will be deported from the country instantly. This has already happened to taxi cab drivers from Central Asia, who arranged a massive fight in Moscow.

What about Manezhnaya Square? This is a completely different story. There were young people rioting on the square too, and the riot had nationalist motives. However, the most important thing that differs the events in Moscow from the riots in France and Britain is that there was the majority, not the minority that went on rampage near the Kremlin walls. This does not justify the rioters, of course, but it makes it all a completely different problem. It also proves that a national riot of non-native minorities in Russia is impossible.