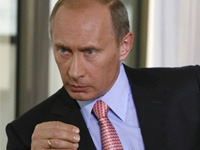 The strange story with the Quadriga award for Russian Prime Minister Vladimir Putin will be best remembered for the fact that the little-known prize has become world famous. It all happened just because of Mr. Putin. To be more precise, Putin has not taken part in the story. It was his name that made the whole story happen.

The award was founded by public organization Werkstatt Deutschland (Workshop Germany) in 2003. According to the organization, the winners of the award have the "spirit of the pioneer" and a desire for "public good."

It was originally decided to give the award for 2011 to Russia's PM Putin. Putin's opponents immediately started saying that it was a small and insignificant award. However, as soon as it was said that neither Putin, nor other laureates were going to receive the award this year, the prize immediately became a very prestigious one, almost like the Nobel Prize. It is amazing how quick evolution can happen: there is only a week between insignificance and prestige.

The news about the decision to give the Quadriga award to Putin caused quite a reaction on the part of his opponents. To be more precise, they went hysterical. The members of the board of trustees of the award began to refuse from their seats one after another. Cem Ozdemir, the co-chairman of the German Green party and Jimmy Wales, the founder of Wikipedia, as well as several other people resigned from their seats to protest the decision to honor Putin. Italy's Corriere della Sera wrote that the ex-president of the Czech Republic, Vaclav Havel, a former dissident, who won the prize in 2009, also stood up against honoring his "old-time enemy." The newspaper did not specify, though, when exactly Putin managed to become an old-time enemy to Mr. Havel.

As a result, the board of trustees of the award decided to cancel the prize for this year. The award will thus be withdrawn from Russia's PM Putin, Mexico's Foreign Minister Patricia Espinosa, German teacher and writer of Turkish origin Betul Durmaz and the Prime Minister of the Palestinian Authority Salam Fayyad.

The prize has stirred quite a controversy. Many people in Europe and Russia were previously unaware of its existence. Now they all know that there is such an award in Germany as Quadriga. The award became that famous only because of Putin. Previously, the prize was awarded to such historical figures as German Chancellor Helmut Kohl and Soviet President Mikhail Gorbachev. Ukraine's ex-President Viktor Yushchenko and Serbian President Boris Tadic, Shimon Peres and Jose Manuel Barroso used to be the laureates of the prize before. However, such names have never made Quadriga a recognizable award.

Nowadays, the prize has finally become world-famous. Will it be an advantage, though? It seems that the board of trustees of the prize do not have any principles at all if they reverse their decision like that.

Vyacheslav Nikonov, the President of Polity Foundation (Moscow) told Pravda.Ru that Putin himself did not need the prize at all. According to Nikonov, the whole story about the prize is nothing but a small German fight.

"There are people in Germany who believe that Putin is a politician who deserves top honors and awards. There are Germans, who, like many Russian human rights activists believe, that Putin is the man, who launched an attack against democratic freedoms in Russia. We could witness this little German fight now. There is nothing else hidden behind it," Nikonov told Pravda.Ru.

Dmitry Peskov, Putin's press secretary, said that the situation with the Quadriga award would not affect the relations between Russia and Germany. Indeed, it would be strange to stake the friendly relations between the two countries just because some people in Germany dislike the Russian prime minister. Such sentiments will be preserved for good, no matter who stays in power in Russia.