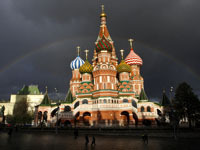 July 12 marks the 450th birthday of Pokrovsky Cathedral, better known as St. Basil's Cathedral, located on Red Square. On this day in 1561 its construction was completed. On the day of its anniversary, the Cathedral invites visitors who care about the cultural heritage and Orthodox Russia.

Currently, Pokrovsky Cathedral is a place of tourist "pilgrimage". Despite the fact that Moscow is full of attractions, not many of them are easily recognizable by visitors, especially foreigners. In this respect, St. Basil's Cathedral can be called a real "brand" of the capital, whose visual image is familiar to the overwhelming majority both in Russia and abroad. Its global significance is the fact that the cathedral was included in the list of the World Heritage sites by UNESCO.

In pictures: The incredible beauty of St. Basil's Cathedral

On the anniversary celebration, July 12, a visit to the Cathedral and tours will be offered free of charge to all visitors. Sessions will be held every 30 minutes. Visitors can get acquainted with its restored interiors and new exhibition, listen to spiritual choir "Doros" and the bells by the bell ringers of the Moscow Kremlin.

The history of the Pokrovsky Cathedral is taught in Russian schools. It was erected in 1555-1561 by the order of Tsar Ivan the Terrible to commemorate the victory of Russian troops over the Kazan Khanate and the capture of Kazan. There is still no clarity as to the "copyright" since there are three theories of its creators. According to one of them, the most likely, it was created by a famous Russian architect from Pskov, Postnik Yakovlev, nicknamed Barma. According to another theory, Barma and Postnik are not one person but two different architects who worked together to build the Cathedral. According to the third theory not confirmed by any documentary sources, the cathedral was built by an unknown Italian architect.

According to a legend, when the cathedral was completed and Ivan the Terrible saw its brilliance, he turned to the master with a question whether he could build a temple equal in beauty or even surpassing it. Upon hearing an affirmative answer, the Tsar, unwilling to have another such architectural masterpiece, ordered to blind the architect. Most likely, this story really is just a legend. According to the documented data (if we consider that the Cathedral was created by Postnik), he could not be blinded, because within a few years after the completion of the Pokrovsky Cathedral he participated in the construction of the Kazan Kremlin.

The story of the Pokrovsky Cathedral is surrounded by numerous legends. In particular, there are legends about the "second" name of the Cathedral - Saint Basil's Cathedral. Initially, the Cathedral stood in place of a white stone Trinity Church, where the most revered in Russia fool-for-Christ Basil was buried. The legend has it that he was collecting money for the construction of the Pokrovsky Cathedral. He would bring it to the Red Square and threw it over his right shoulder, and nobody, even thieves, touched these coins. Before his death in August of 1552, he gave it to Ivan the Terrible, who soon ordered to build a temple on the site. According to another legend, Ivan the Terrible built the temple in honor of his father Basil III. Some attribute the following phrase to him: "I will be remembered by people without a church a thousand years later, but I want my parent to be remembered." It is for this reason that the Cathedral, allegedly, became known as St. Basil's Cathedral.

In addition to the many legends, there is some interesting evidence on the architectural features of the Cathedral. Everything - from the number of caps to their location in relation to each other - has a special Christian symbolism. The cathedral is an architectural image of the biblical New Jerusalem - the Kingdom of God described in Revelation. The cathedral consists of eight churches, organized around the ninth towering over them pillar-like church in honor of the Protection of the Mother of God. The number "eight" represents the day of Christ's resurrection, which in Hebrew calendar was the eighth day, and the coming kingdom of heaven - the kingdom of "Eighth Century" (or "Eighth Kingdom"), which comes after the Second Coming of Christ, after the end of the earth's history related to apocalyptic number "seven". In the old St. Basil Cathedral there were 25 domes designating the Lord, and 24 elders sitting around His throne. Currently there are only ten.