The Cathedral of Christ the Savior is celebrating its anniversary. 170 years ago Tsar Nicholas I ordered to build a cathedral in place of Alekseevsky Convent. The construction was completed 44 years later, in 1883. On December 5 1931, Bolsheviks blew the Cathedral up to build a huge Soviet Palace crowned with an immense statue of Lenin. 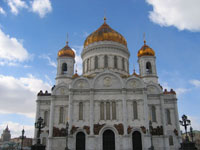 By the time World War II started construction workers only had enough time to build the foundation of the palace. The grandiose plans never materialized. A swimming pool named ‘Moscow’ was built there instead. The pool was closed most of the time. Architects claimed that there were design mistakes, and religious people whispered that it was “God’s revenge.”

According to a legend, this place was cursed in 1839 by a hegumeness of Alekseevsky Convent that was moved to the other side of Moscow because of the cathedral construction. The nun allegedly promised that no structure would stand there for centuries. The first cathedral stood there for 48 years, and “Moscow” swimming pool - only 34.

In 1994 the pool was demolished and the cathedral reconstruction commenced. About one million Muscovites donated money for the project. There are still arguments about the reconstruction. First the project was supervised by architect Aleksey Denisov. Soon he was fired from the project because of disagreements with the Mayor’s office.

“The officials wanted the cathedral to look modern,” Denisov told The Komsomolskaya Pravda newspaper. “The main mistake was bronze and plastic bas-relieves of saints on the cathedral façade. But achange of material was only half the trouble. Sculptors who created these bas-relives for some reason made them look like a caricature. All saints looked like dolls… It can be easily proved if you look at the original bas-relief stored in Donskoy Monastery.”

Denisov said there were mistakes made in the interior of the cathedral as well. Restorers used oil paint instead of acrylic paint. But acrylic paint is brighter and lasts longer. As a result the altar looks garish.

“It’s too late to rebel,” says Yevgeny Karlov, an art historian and the author of several architectural monographs. “Restoration of the Cathedral of Christ the Savior is not so much an important cultural benchmark, but an act of historic fairness. In this case the fairness has been restored.”