Putin cracks down on NATO, Gaddafi and UN 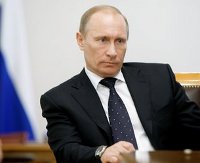 Vladimir Putin released an official statement about the situation in Libya, where NATO launched Operation Odyssey Dawn approved by most recent resolution of the UN Security Council. The head of the Russian government criticized the positions of all sides in the conflict - NATO, the UN Security Council and Libyan leader Muammar Gaddafi.

To avoid possible questions beyond his competence, Putin said that he did have a personal attitude to the events in Libya, even though the Russian government was not dealing with foreign political issues.

Russia does not participate in the military operation in Libya and abstained from voting at the UN Security Council. Russian top politicians did not release any landmark statements during the time when the world media were discussing the oncoming operation either.

Vladimir Putin stated on March 21 that the resolution of the UN Security Council on Libya was flawed.

"The Security Council resolution is deficient and flawed; it allows everything and is reminiscent of a medieval call for a crusade," Putin told workers at a ballistic missile factory in the Urals region. "It effectively allows intervention in a sovereign state," RIA Novosti quoted him as saying.

It is worthy of note that Gaddafi made a similar comparison when he was commenting the approval of the resolution of the UN Security Council. In his audio appearance on March 20, Gaddafi described the actions of the international coalition as a new crusade and a terrorist act, the real goal of which was to take possession of the Libyan oil.

Putin did not defend Gaddafi, though. The current Libyan regime can not fall under the criterion of a democratic country, Putin admitted. "It's obvious, but it doesn't mean that someone can interfere in an internal political conflict from outside, defending one of the sides," Putin added. Libya is a complex nation, which is based on the relations between the tribes, he also said.

Vladimir Putin harshly criticized the politics of the United States of America, but left Britain and France out of his attention.

"This U.S. policy is becoming a stable trend," Putin said, recalling the U.S. air strikes on Belgrade under Bill Clinton and Afghanistan and Iraq under the two Bush administrations.

"Now it's Libya's turn - under the pretext of protecting civilians," the premier said. "Where is the logic and conscience? There is neither."

Putin described the military operation of coalition troops in Libya as an "external aggression."

"The ongoing events in Libya confirm that Russia is right to strengthen her defense capabilities," he concluded.

As for casualties, Putin supports the position of the Libyan administration, which said that as many as 64 civilians had been killed in the bombings.

Russia wants to live in peace with everyone, Putin said. However, Russia needs to develop its defensive capacity despite its peace-loving policy, Putin said.

Russia's Foreign Minister Sergei Lavrov stated earlier that the use of military force against civilians in Libya was out of the question.

"It is absolutely unacceptable for a country to use military power against its own population, as it happened in Libya," Lavrov said at a news conference after the talks with the general secretary of the League of Arab States, Amr Musa.

Lavrov expressed regrets about the fact that Gaddafi's regime had not listened to the requirement from the international community. As a result, the League of Arab States addressed to the UN Security Council seeking measures to defend the civil population.

"We support this position. We do not accept the use of military force against civilians. That is why Russia joined the consensus of world superpowers with a requirement to cease violence against the civil population. However, Gaddafi's regime did not listen to the requirements of the international community, and the UN Security Council approved the resolution.

Lavrov is certain that it is only the Libyan nation that can determine the future of Libya now.

"No one can predict the consequences of the current situation in Libya. We hope that they will be minimal and that they will not undermine the territorial integrity of Libya and the region," Russia's foreign minister said.

Amr Musa stated that in its assessment of the situation in Libya the League of Arab States proceeded from the necessity to defend the civil population and prevent casualties. The League demanded the UN should protect the civilians against brutal and unprecedented actions of the government in the first place.