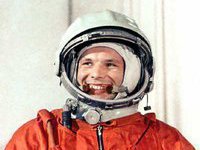 This year, the world will celebrate the 50th anniversary of Yuri Gagarin's flight into space. The family of first man in space decided to have a special celebration of the important date and registered the name of the world's first cosmonaut as a trademark. Officials of Russia's space corporation Roscosmos said that no one was going to profit from the name of the national hero. Quite on the contrary, the trademark was registered to protect the name of Yuri Gagarin from profanations.

It seems that Russia has been obsessed with registering trademarks recently. On January 28, former spy Anna Chapman registered her infamous name as a trademark too. Now her name can be used for cosmetic products, watches, clothes, beer, vodka, etc.

Yuri Gagarin's youngest daughter also went to Russia's Federal Service for Intellectual Property to register the Yuri Gagarin trademark. Experts evaluated the trademark at one billion rubles. This initiative is not about the money, though, it is about the principle. Officials at Roscosmos said that they did not see anything negative about it.

"I do not see anything disgraceful about it since everyone tries to profit from Gagarin's name," the head of Roscosmos Anatoly Perminov said.

Indeed, plenty of people will try to make money on Gagarin during the celebration of the anniversary.

"For the 40th anniversary of Gagarin's spaceflight there were incidents when people tried to distort history connected with his name. Now in Britain they published a comic book about Gagarin, which says that he had been forced to fly into space against his own will," Alexander Vorobyov, the press secretary of Roscosmos told Pravda.Ru.

It goes about the graphic novel titled "Yuri's Day: The Road To The Stars." Authors Andrew King, Pierce Bison and Peter Hodgkinson said that they had published the book in an intention to unveil the complexity of Soviet reality "in all of its insane and cruel splendor."

"Yuri Gagarin, the first man ever to journey into space, is known to most of us only as a vague, smiling figure in a metal helmet. We in the non-Russian world have little idea of what happened to him after his historic space trip. Yuri earned the loyalty and respect of his cosmonaut colleagues, and the love of the Russian people. In fact he became a popular and handsome global superstar - but Yuri's Day reveals Gagarin's gradual disillusionment with the Soviet system that created him," the authors said.

The wish of Gagarin's youngest daughter to patent her father's name does not raise any eyebrows after such remarks indeed.

"We are expecting a wave of various speculations on the name of Yuri Gagarin. We've already had a call from a colonel-general, who offered to conduct an investigation into the reasons that led to cosmonaut Gagarin's death. We believe that everything has been historically proved at this point. The facts confirmed by specialists and experts can be found on the website of Roscosmos. I believe that the cosmonaut's relatives made the decision in connection with all those things. They just want to prevent the distortion of history," an official spokesman for Roscosmos said.

In 2007, Galina and Elena Gagarin filed a lawsuit against Russian film company Central Partnership. In 2007, the company released a film titled "Gagarin's Grandson." The main character of the film, played by Aleksei Panin, tells everyone that he is the grandson of first man in space. Here is an example of what the character was saying about his "grandfather."

Gagarin's daughters claimed that the film discredited their honor and distributed untrue information about their father. The judges agreed with the plaintiffs. The case triggered an interesting reaction in the media. The plot of the film was based on the character who was telling lies about the cosmonaut. Therefore, there was no reason to believe that the film caused any moral damage to Gagarin's daughters. Spokespeople for the film company stated that the court created a precedent which could be equated to censorship.